The no. 15 Oklahoma State Cowboys remain unscathed in conference play after surviving a pesky Kansas Jayhawks squad in Week 7, but they still have loads of work to do if they are to continue their rise through the college football rankings. They can make a huge leap upwards with a win against the no. 12 TCU Horned Frogs, who are coming off a barnburner of a game against the Baylor Bears. This game is included in our list of the five best college football games to watch in Week 8, which you can read here.

Find out more about this crucial Big 12 tussle between two teams who are on the outside looking in for a Top 10 position in the next update of the rankings. You can also check out our preview of Texas A&M and Alabama here.

[sc:NCAA240banner ]Oklahoma State did not have it easy, but they nonetheless recorded their fifth-straight win this season with a 27-20 victory over the Kansas Jayhawks last Saturday. The Cowboys will now take the road for a matchup against fellow Big 12 contender, TCU. The Cowboys have won their last two meetings against TCU, both games on the road. They are also 2-0 ATS in those contests.

The Cowboys have climbed from outside of the Top 25 up to their current position of no. 15 mainly because of their offense, which has produced an average of 37.2 PPG, 27th in the FBS overall. At the driving seat of their attack is quarterback Daxx Garman, who has so far proven that he has the chops to guide a pass-first team that has put up 272.2 yards per game, good for fifth in the conference.

However, that kind of defensive ineptness should be charged to the Horned Frogs’ secondary and not on its front seven that has averaged 3.8 sacks per game this season. The Cowboys’ offensive line must step up big time on Saturday or else see their passing game will be corrupted by TCU’s terrific pass rush. So far this season, the Cowboys’ protection unit is the worst in the conference having let opposing defenses record 16 sacks.

Betting on the TCU Horned Frogs 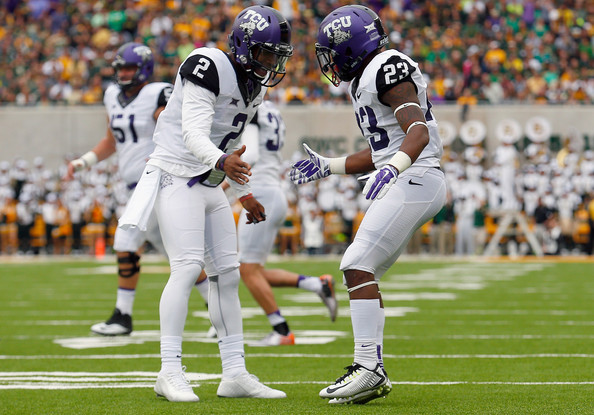 After getting a taste of their own medicine in their 61-58 loss to the high-scoring Baylor Bears last week, the Horned Frogs return to Fort Worth looking for a win that would restart their push for a spot in the upper echelon of the rankings. TCU is 3-0 in its last three home games. The Frogs are also 4-0 ATS in their last four contests at Amon G. Carter Stadium.

A loss against the Cowboys would be a gut shot to the chances of TCU of making the inaugural College Football Playoff, and QB Trevone Boykin definitely has that in mind.

Boykin is the team’s leading passer and rusher, as the dual-threat QB is putting up team-best numbers of 292.6 and 61.0 passing and receiving yards per game, respectively.  He’ll be sharing the work on the ground with running back B.J. Catalon, who has 268 rushing yards and six touchdowns. Catalon has scored at least one touchdown in each of TCU’s five games thus far this season.

Boykin has a lot of weapons to choose from when they go up against the Cowboys, and the junior signal-caller likes to spread out his passes. TCU has six players with at least 10 receptions. Kolby Listenbee stands out among the rest of the receivers, having caught 18 passes for 418 yards and three touchdowns this year.