Once again, college football provided us with several exciting games in Week 7. One of those big games, an upset win by surprise contender Mississippi State over the Auburn Tigers changed the landscape of the SEC title hunt. Now entering Week 8 of the college football season, each game is turning out to be a must-win scenario for the contenders.

Below, we list the best college football games to watch (and bet on) in Week 8. Perhaps the biggest game of them all is a showdown between undefeated teams, the Notre Dame Fighting Irish and the defending national champions Florida State Seminoles. You can view the complete preview of that game here. In the meantime, read on so you can plan your weekend around the exciting football games to come.

Top Five Games to Watch in Week 8 of College Football

[sc:NCAA240banner ]The Oklahoma Sooners had a bounce-back win against the Texas Longhorns 31-26 on Saturday. Despite the win, the Sooners were outgained 482-232 in total yards, while going 1-for-11 on third down conversions. However, their special teams and defense had a couple of big plays. Alex Rose returned a kickoff for a 91-yard touchdown, while cornerback Zack Sanchez had a 43-yard pick 6, both in the first half.

Sanchez should be on the lookout for errant passes from Kansas State quarterback Jake Waters, who was picked off twice against their first ranked opponent, Auburn, on September 19.

Writer’s prediction: The Wildcats prove to be a tough challenge and cover, but the Sooners take the home win.

The Texas A&M Aggies suffered back-to-back defeats to Mississippi State and Ole Miss. Still, the Aggies’ offense remains potent with Kenny Hill behind center. Hill has passed for 766 yards and six touchdowns in the past two games. He should be able to exploit Alabama’s secondary which allows 208.3 yards per game.

Meanwhile, the Tide’s rushing game should get back on track against Texas A&M’s rush defense, which has allowed 174.9 yards per game in seven outings. T.J. Yeldon and Derrick Henry have shared the load for Alabama leading the running attack with a combined 764 yards and four scores.

TCU running back B.J. Catalon scored three touchdowns, including a 94-yard kickoff return, Trevone Boykin passed for 287 yards and a score, and the Horned Frogs led by as much as 21 points against Baylor on Saturday. However, they squandered the lead in a 61-58 come-from-behind loss. They’ll have another chance to upset a ranked team when they go against Oklahoma State at home.

Nevertheless, the Cowboys are on a five-game winning streak, and have won their two games against TCU in the past two years. However, quarterback Daxx Garman needs to be weary of TCU’s pass defense which has nine interceptions through five games. Garman was picked off five times in his past three games.

Writer’s prediction: The Horned Frogs rebound with a big win and cover over Oklahoma State. 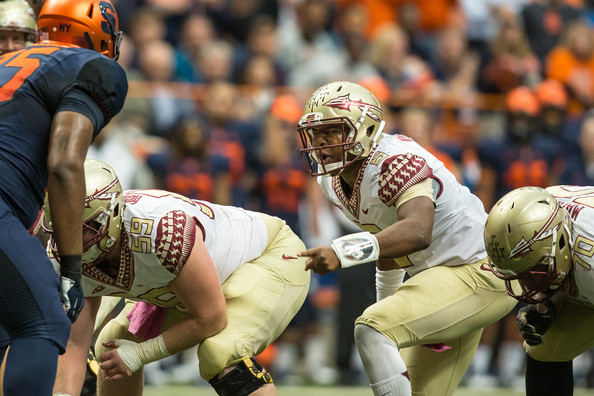 Reigning Heisman Trophy winner Jameis Winston had a nearly flawless performance against Syracuse. He completed 30 of 36 passes for 317 yards and three touchdowns. However, he may find his performance difficult to replicate against a tough Notre Dame defense which has collected 10 interceptions this season.

Writer’s prediction: The ‘Noles take the win, but the Fighting Irish keep it too close for comfort as the game goes under the total.

The Sun Devils’ passing game is clicking with backup quarterback Mike Bercovici. He threw for 998 yards and eight touchdowns in the two games he started for an injured Taylor Kelly. Bercovici found receivers Jaelen Strong and Cameron Smith for a combined five passing scores. However, he’ll find Stanford’s vaunted defense a stiffer test.

The Cardinal have five players who have caught an interception, ensuring a suffocating coverage against opponents. Linebacker Blake Martinez was the latest player for the defensive backfield to add an interception when he picked off the nation’s leading quarterback in passing yards, Washington State’s Connor Halliday (3,344).

Writer’s prediction: Stanford’s defense lives up to the hype as they win the turnover battle and eventually the game.

Create a betting account now and catch all the lines for the exciting college football weekend ahead.