The Oklahoma State Cowboys (5-0, 2-0) continue their dominant start, as they have won all of their five games this season. But their perfect record will be challenged once again when they pay the West Virginia Mountaineers (3-1, 0-1) a visit at Milan Puskar Stadium  for what’s surely going to be an explosive matchup that must not be missed.

Who will emerge victorious? Will the Cowboys stay hot? Or will the Mountaineers extinguish their flame?  Read on below for a complete breakdown of this Big 12 showdown. And if you’re yearning for some more football action, check out our Week 5 NFL previews: Seahawks vs. Bengals and Jaguars vs. Buccaneers.

It’s been so far, so good for the Oklahoma State Cowboys through the first five weeks of the season. The Cowboys remain undefeated after escaping with a thrilling 36-34 triumph over Kansas State last Saturday. QB Mason Rudolph was fantastic in this game, completing 34 of his 55 passes for a career-high 437 yards with three touchdowns and just one interception to lead his team.

[sc:NCAA240banner ]The biggest play of the game, though, came from Ben Grogan, who delivered when it mattered most yet again for the Cowboys in this one. He successfully nailed a 37-yard field goal with 32 seconds left on the clock to lift the Cowboys to a two-point victory and ultimately improve to 5-0 on the year.

Now, the Cowboys will be looking to sustain this momentum and earn their sixth-consecutive victory when they travel to Morgantown to lock horns with the West Virginia Mountaineers at Milan Puskar Stadium this coming weekend.

That said, they’ll have a very good chance in accomplishing with the return of their top two running backs, Chris Carson and Rennie Childs, who are both expected to return after missing last week’s game due to undisclosed injuries. The Cowboys were held to just a total of 49 rushing yards opposite K-State, but having these two players back in the lineup will certainly be a tremendous boost to their formidable ground attack.

Meanwhile, the air game could turn out to be another main weapon for the Cowboys, who are averaging 9.1 yards per catch through five games. Senior wide receiver, David Glidden, has been a testament to this, as he leads the team with a total of 407 yards on 23 receptions and three touchdowns to his name thus far this year. 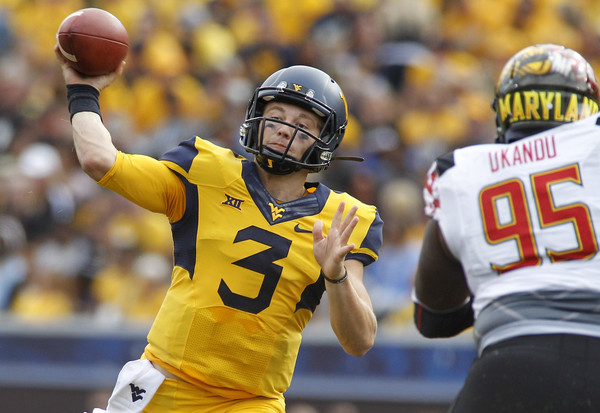 West Virginia’s 3-0 start came to a bitter end in the hands of the Sooners, who convincingly beat them, 44-24, at Memorial Stadium and are now own a 4-0 record on the season.

The Mountaineers tried their best to keep it close at the end. However, they couldn’t find a way to get past a pesky defense that forced them to five crucial turnovers and seven sacks to their third-year quarterback, Skyler Howard, who finished the game 17-of-32 for 173 yards with a touchdown and three interceptions while also fumbling the ball twice.

Now heading to their Week 6 matchup with the undefeated Oklahoma State Cowboys, the Mountaineers need everyone at their best form in order to bounce back and, in particular, capitalize on their ground game that ranks third-best in the Big 12 with 214.25 yards per contest through four games.

It’s safe to say that the junior tailback Wendell Smallwood is bound for another huge game this weekend. Smallwood, who leads the team with 442 rushing yards, has rumbled for 258 yards combined over his two previous contests.

Also, defense is most probably going to be the difference-maker for the Mountaineers in this game. Even though they gave up 44 points to Oklahoma in their last game, they are still the No. 1 defensive team in the conference with only 16.8 points allowed per contest this year.

West Virginia is 6-4 SU and ATS in its previous 10 home games.