The last time No.4 Oklahoma Sooners and No. 1 Clemson Tigers shared the field, the nation was treated into one of ugliest bowl games, when the Tigers eked out a walk-in-a-park 40-6 win in the Russell Athletic Bowl last season. The Sooners, however, don’t look like pushovers though this time around with Baker Mayfield leading the team.  [sc:OrangeBowl250 ]Will the Sooners hit two birds by avenging that loss and securing a spot in the national championship game by winning over Clemson? Or will the Tigers continue their mastery of Oklahoma and prolong their undefeated season?

Read on for more about this game. You can also check out our preview of the other College Football Playoff semifinal game between Alabama and Michigan State.

A loss to Texas back in October appeared to be catastrophic for Oklahoma’s chances for a CFP spot. But seven-straight wins after that and a little help from a Stanford field goal to defeat Notre Dame has the Sooners punching a ticket to the Orange Bowl.

The Sooners’ success this season is mostly built on the back of a crushing offense led by Texas Tech transfer Baker Mayfield. Mayfield has been one of the most efficient quarterbacks in the nation, passing for 3,389 yards with 35 touchdowns and only five interceptions. With Mayfield running the show on offense, the Sooners have been able to put upaverages of 307.9 passing yards and 45.8 points per game, 18th and third in the nation, respectively. Mayfield will be in for a tough test against Clemson’s stout pass defense, but at least he’s going to get support from a solid backfield, led by Samaje Perine and Joe Mixon.

With such a high-powered offense, the Sooners are looking to force Clemson into committing turnovers for extra possessions. Clemson hasn’t been good in taking care of the pigskin, as the Tigers have picked up 25 turnovers while forcing 23 this season. On the flipside, the Sooners are fifth in the nation in turnover margin with a plus-13.

Oklahoma, which allows 20.8 points per game, is 6-1 ATS in its last seven outings. 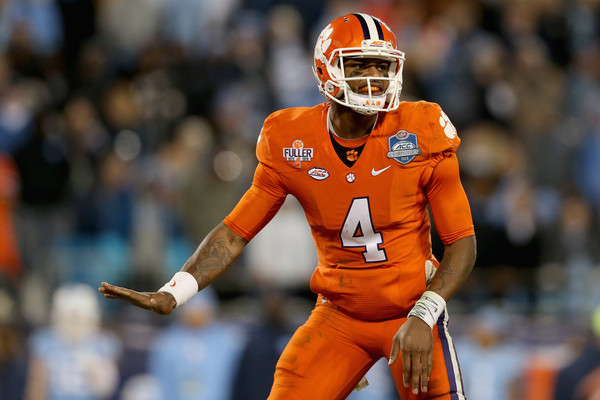 The Tigers have the psychological advantage over Oklahoma, having bludgeoned the Sooners in last season’s Russell Athletic Bowl. That said, it’s what they would do on the field this coming Thursday which will earn them a slot in the national championship game.

The pressure is definitely mounting on Clemson, as the Tigers enter the ball game undefeated. Hopefully for them, their familiarity with Sun Life Stadium would ease some of the anxiety. The Tigers were in the Miami Gardens area early this season, when they absolutely mauled the Miami Hurricanes in a 58-0 victory.

Number one on Clemson’s priority list is to contain OU’s high-octane offense. And based on Clemson’s performance throughout the season, the Tigers should be able to make the necessary stops to slow down Baker Mayfield and company. Clemson is fifth in the nation in pass defense with just 166.9 yards allowed per game and sixth in sacks with 38.0 on the season.

On offense, the Tigers will go as far as DeShaun Watson will take them. The Heisman Trophy award finalist has been superb this season. Watson has 3,512 passing yards on the season to go along with 30 touchdowns and 11 interceptions. He’s also passed for at least 260 yards in eight of the Tigers’ last nine games. A dual-threat quarterback, Watson has compiled 887 yards on the ground and 11 rushing scores. In short, Watson can do it all, and he’ll be expected to show up against Oklahoma, regardless of the tricks the Sooners’ defense would throw at him.