We’re finally down to the last eight players in the quarterfinal round of the 2015 US Open, with both Petra Kvitova and Flavia Pennetta surging at the right moment to set up their clash against one another.

Can Kvitova extend her career-best run at the US Open with another statement victory, or will Pennetta continue her excellent play of late? Read on as we look closer at this upcoming match that will surely get the crowd at Flushing Meadows on its feet.

Don’t miss out on all the happenings in the quarterfinal round of the men’s side of the tournament. Check out our previews for Federer vs. Gasquet and Wawrinka vs. Anderson right after this.

What a monumental win it was for Petra Kvitova, who ousted streaking Brit Johanna Konta from the tournament with a collected 7-5, 6-3 win on Monday.

[sc:Other240banner ]Not only did Kvitova end Konta’s 16-match winning streak, she also made it to the quarterfinal round of the US Open for the first time in her career. Kvitova won all two of the break points she faced, while Konta failed to convert on all five of her own break point attempts.

With the win, the 25-year-old superstar from Bilovec became the first Czech to reach the quarterfinal round of the US Open since 2001. Kvitova is certainly on a tear in Flushing right now, and she’s doing it in very impressive fashion. She has yet to drop a match in the tournament, winning all eight of her matches from the first four rounds.

However, Kvitova will face what’s likely her toughest competition in the event to date in Flavia Pennetta. The two of them have split their career meetings at three wins apiece with Kvitova winning the last three affairs, including the most recent one from the 2012 Olympics in straight sets.

Create a betting account now before it’s too late to bet on all the exciting matches from the final Grand Slam tournament of the year. 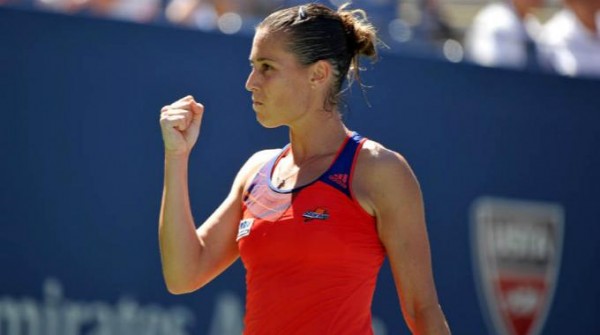 As much as Kvitova has been remarkable throughout the entire US Open this year, Flavia Pennetta, on the other hand, was once again remarkable in general here in her favorite Grand Slam event.

After a gritty 6-4, 6-4 win over Aussie Samantha Stosur, Pennetta advanced to the quarterfinal round of the US Open for the fifth time in the past seven years. Stosur had quite a hand in Kvitova’s victory, though, committing 35 unforced errors on Monday. But that’s not to take anything away from the World No. 26’s stellar play at all, especially after she won 29 of her 34 first serve points.

With the win, Pennetta also improved her record at Flushing to a respectable 24-10, and partial credit can be given to the hard courts of Arthur Ashe Stadium. The Italian has relatively excelled on hard courts of late, having a 36-10 record on this surface dating back to last season.

And although Pennetta has dropped the last three of her meetings against Kvitova, two of those three matches happened to be three-set decisions. To add, the 33-year-old took the first three encounters against the Czech, beginning with straight-sets victories in 2009 at Barcelona and at the Indian Wells Masters in 2010.

Kvitova loses her first set of the tournament, but still emerges victorious over Pennetta in a hard-fought match that goes the distance.