The Pittsburgh Panthers and Gonzaga Bulldogs will say konnichiwa to the start of their respective college basketball seasons in Okinawa, Japan for the fourth annual Armed Forces Classic.

The Zags, who are coming off a spectacular season which saw them reach the Elite Eight, are expected to have one of the best frontcourts in the country, led by star senior Kyle Wiltjer. Will the Zags’ size pay off against the Pittsburgh Panthers, who will looking to bounce back from last year’s disappointing campaign?

Read on below for our preview of this ACC vs. WCC matchup. And for more great action from the first day of college hoops, check out our previews of Texas vs. Washington and Albany vs. Kentucky.

The 2014-2015 season was not a good one for Pittsburgh. The Panthers went just 19-15, their fewest number of wins in 12 seasons under head coach Jamie Dixon. Pitt struggled particularly on the defensive end, as it ranked all the way down in 202nd in defensive efficiency.

[sc:NCAAB240banner ]Pitt was 30th in offensive efficiency, though, and will return juniors Jamel Artis and Michael Young, who combined for 27 points and 13 rebounds per game as sophomores last season. They’ll be joined by fellow juniors Sheldon Jeter and Chris Jones and senior point guard James Robinson. Meanwhile, three graduate transfers (Alonzo Nelson-Ododa, Rafael Maia and Sterling Smith) will add some depth to that experienced core.

The Panthers, like just about every team that will face Gonzaga this season, will be giving up some size along the frontcourt. However, they do have a number of big bodies with Rozelle Nix (6-11), Nelson (6-9), Maia (6-9) and Young (6-9) to throw at the Zags bigs defensively.

One position where the Panthers should enjoy a decided advantage in is at point guard. Robinson was one of the most prolific setup men in the nation last season as he averaged 5.1 assists per game. He’ll be matched up with the Zags’ redshirt freshman Josh Perkins, who missed nearly all of last season due to a broken jaw.

Pittsburgh is an incredible 12-0 in season openers under Dixon, although that record will be under legitimate threat against Gonzaga.

Create a betting account now and cash in on all the best college basketball action. 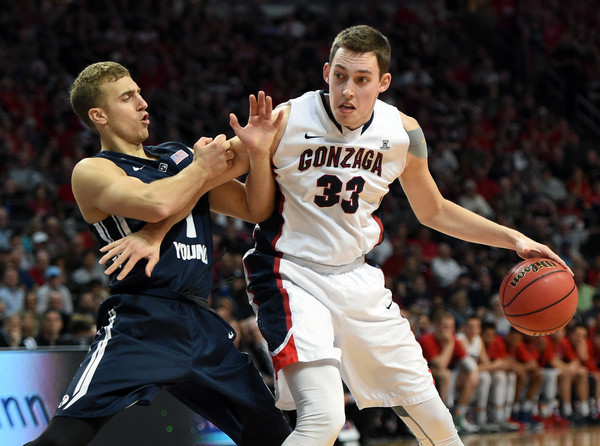 Gonzaga enjoyed yet another highly successful regular season under Mark Few last season. The Zags went as high as No. 2 in the AP Poll, and eventually went 35-3 to claim a No. 2 seed in the tournament, where they lost out to eventual champion Duke in the Elite Eight.

The Zags lost three key senior guards from that team in Kevin Pangos, Gary Bell, and Byron Wesley. That leaves the Zags pretty light on experience and proven production in the backcourt. However, the jobs of Josh Perkins, senior Kyle Draginis and co. should be pretty simple: just get the ball to arguably the best, most physically imposing frontcourt in the nation.

6-10 Kyle Wiltjer, who led the team with nearly 17 points and six rebounds per game last season, is expected to one of the best players in the country in his senior year. 6-11 Domantas Sabonis averaged 10 points and a team-high seven rebounds as a freshman last season, and should be even better this season. Sabonis suffered a back injury during an exhibition game, but should be ready for the opener.

7-1 Przemek Karnowski (11 points and six rebounds) should also be a beast in his senior year while 7-1 sophomore Ryan Edwards sits and waits his turn.

The sheer size and talent of the Zags bigs should allow them to score pretty effectively inside against the Panthers. That size will also be a big advantage for Gonzaga defensively against a Pitt team that is a poor perimeter-shooting team and relies a lot on points in the paint.