The Pittsburgh Penguins just can’t stop winning. The Pens have been the hottest team in the NHL for the final month of the regular season, and will be firing on all cylinders heading into the 2016 Stanley Cup playoffs. They’ll end their regular season in nearby Philadelphia, where they have a chance to complete the sweep of the Philadelphia Flyers and strike a big blow to their bitter rivals’ playoffs hopes.

Read on below for our breakdown of the fourth and final round of the Battle of Pennsylvania. Meanwhile, check out more of the weekend’s NHL action with our previews of the Red Wings vs. Bruins and Caps vs. Blues.

Make that eight wins in a row and 14 wins in last 15 for the Pens. They nearly gave one away after leading by three goals on Thursday against Washington, but Sidney Crosby came up with the game-winning goal in overtime to give them the 4-3 win.

The Pens just can’t stop scoring at the moment. They’re averaging 5.6 goals during their seven-game win streak, including six in their 6-2 demolition of the Flyers this past Sunday. Sid the Kid scored another goal against the Flyers in that game, putting his total to five points against them in three meetings this season.

The Pens’ tremendous goal support has only fueled the confidence of goalie Matt Murray, who has started the last four games in place of the concussed Marc-Andre Fleury. Murray, who’s 9-2-1 on the season, has won his last six starts.

The Pens also put four goals past the Flyers in each of their previous two meetings this season, both wins. They’ve gone 9-1 in their last 10 road games, and shouldn’t be intimidated by the raucous atmosphere in their rivals’ home ice.

Create a betting account now and cash in on all the top NHL action. 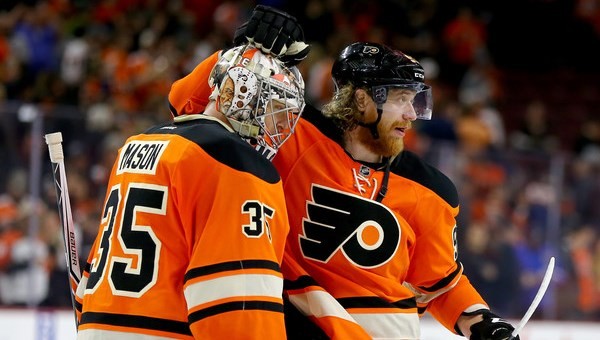 The Flyers sure aren’t helping their playoff hopes. Philly has now lost three consecutive games after falling 4-3 to the last-placed Toronto Maple Leafs in overtime on Thursday. Despite a third period comeback, it was still a disappointing display from a team that is supposedly chasing a playoff place.

The Flyers did earn a valuable point, though, and are still just one game back of the Bruins for the final wild-card spot with an extra game to play. The Flyers still have control of their own fate, and if they win both of their remaining games, they’re in.

They’ll be hard-pressed to come away with a much-needed win against a red-hot Penguins team, but at least they’ll have the support of their home crowd in that crucial game. Philly has gone 22-10-8 at home this season.

Goalie Steve Mason, who disappointingly gave up four goals on just 26 shots against the Leafs on Thursday, has been pretty reliable for the most part at home this season. Prior to the loss, he had gone 7-1 in his previous eight home starts, with just 13 goals conceded.

Don’t count out some more Wayne Simmonds heroics as well. Simmonds scored the goal that forced overtime in the Leafs game, his fifth goal in the last six games. He also scored one of the Flyers’ two goals in their most recent loss to the Pens.

The Pens complete the sweep with a 4-3 win over the Flyers.