The love-hate relationship of college football with the BCS has ended. Next season, the NCAA will be ushering in a new one: the four-team playoff. What’s in store for us in the 2014-2015 college football season? Below are five early predictions.

For the latest updates on the college football season, you read more of those here.

1. The Florida State Seminoles Will Repeat as College Football Champions

Two words – Jameis Winston. Even if the Seminoles lost many of its starters from its championship-winning team, they retain the service of Winston, who is definitely the most important player of that squad. Furthermore, the reigning Heisman Trophy winner isn’t the only standout player for the Seminoles next season. He’ll have some talented weapons to work with, including receiver Rashad Greene and tight end Nick O’Leary.

[sc:NCAA240banner ]Experience in the offensive line is a big plus, too, for the Seminoles. They have five seniors returning to the O-line, which is going to be big for Winston. With the experience and familiarity to Winston’s tendencies, the offensive line will make it even harder this season for opposing defenses to touch their QB or even force errors.

Lastly, the Seminoles can benefit greatly from the four-team playoff system. They just need to make the top four in the rankings, thus easing them off the supposed added pressure of making the top two to get to the championship game, just like during the BCS era.

Last year’s college football champion will be a strong contender, just as the Baylor Bears, the Georgia Bulldogs, and the Oregon Ducks are going to be. All of them will make it to the first four-team bracket playoffs in NCAA football history.

As mentioned above, the Seminoles are going to be champions again. The Bears will always be there in the discussion so long as Bryce Petty continues to orchestrate Baylor’s soul-crushing offense. Gus Malzahn and his Auburn Tigers are going to represent SEC in the playoffs. Even though Tre Mason and Greg Robinson have departed for the NFL, quarterback Nick Marshall is going to be the best quarterback in the SEC next season. As for Oregon, NFL-ready Marcus Mariota will carry the Ducks into as high as No. 1 in the rankings.

3. The Auburn Tigers Will Defeat Alabama Crimson Tide in the Regular Season and in the Iron Bowl

The Crimson Tide can’t wait to avenge their loss to Auburn in last season’s Iron Bowl. But the Tigers will just be as motivated to win against them. For one, the Tigers are eager to prove they can beat Alabama without needing divine intervention via a missed-field-goal-touchdown.

Moreover, Auburn doesn’t have to face Aaron McCarron anymore. Instead it’s going to be Jacoby Cooker, a highly touted recruit with so much to prove. Until Cooker can prove himself against tough opponents, who will not come often as Alabama have an easy schedule, it’s natural to think that Auburn’s Nick Marshall will outplay him.

The Tigers are priced +900 to win the 2015 College Football Championship. Create a betting account now to  bet on college football futures.

4. The Auburn Tigers Will Win the SEC

Sure Auburn have problems to address on their defense, but which team out there doesn’t have any chinks in their armor? The offense will be good enough to cover for defensive lapses. Tre Mason’s departure won’t be felt as much as some are saying. Auburn’s backline will be just fine with freshman Roc Thomas and Peyton Barber. In addition, quarterback Nick Marshall has the legs, too, to gain yards on the ground.

5. Marcus Mariota Will be the 2014 Heisman Trophy Winner 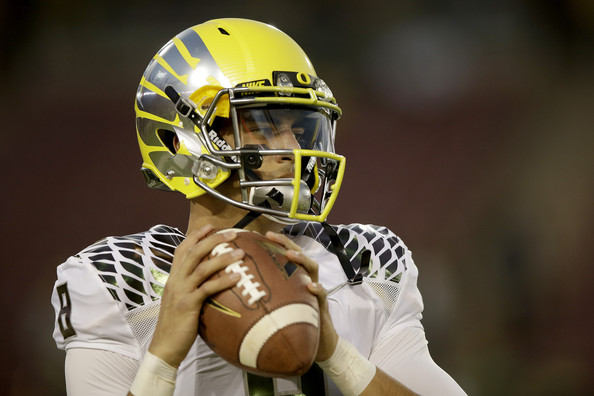 Behind quarterback Marcus Mariota’s exploits, the Oregon Ducks were among the highest scoring teams in the college ranks last season. Mariota was as much of an aerial threat as he was on the ground in 2013, leading the Ducks in passing (3,665 passing yards) and average rushing yards (7.4 per game).

And after his tour-de-force performance in the Alamo Bowl, where he passed for 253 yards and rushed for 133 in the Ducks’ win against Texas, it seemed that Mariota was actually ripe for the NFL. Fortunately for the Ducks, Mariota decided to stay for at least one more year at Eugene.

Mariota will get those numbers again next season, and with an early September match against the Michigan State Spartans, Mariota has a perfect opportunity to set the air and the ground on fire against one of the nation’s top defense. If he does, then expect the noise of his Heisman campaign to go off the charts.