The National League Championship Series shifts back to St. Louis as the Cards will have another chance to close out the Dodgers. Meanwhile in the NHL, divisional rivals square off with the Ducks’ five-game winning streak on the line.

The Boston Red Sox staved off a comeback attempt by the Detroit Tigers and hung on to their 4-3 victory, while taking command in the ALCS.

Their last meeting was an old-fashioned mauling, and the Seattle Seahawks took out the Arizona Cardinals again with a 34-22 victory.

Dallas Crawford ran for a career-high 137 yards, including a go-ahead 3-yard touchdown with 16 seconds left that gave Miami a 27-23 victory over North Carolina.

With last year’s stunning collapse still fresh in their minds, the St. Louis Cardinals will have an opportunity to redeem themselves when try to close out the NLCS against the visiting Los Angeles Dodgers in Game 6. However, the Cardinals must now face Dodgers pitching ace Clayton Kershaw, which is never easy against the leading Cy Young Candidate. Rookie ace pitcher Michael Wacha will be on the mound for the Cardinals.

Offense had been limited throughout the series until the Dodgers fired off four homers – two by Adrian Gonzalez – to avoid elimination with a 6-4 victory in Game 5. The Dodgers aren’t the only team that is getting their mojo hits back. The Cardinals have had 10 hits after having only 12 in the previous three games. Cardinals left fielder Matt Holliday is 5-for-8 with a homer and three RBIs in the last two games.

The Dodgers’ fate is at the hands of Kershaw, and he has delivered for LA so far. Los Angeles is 4-1 in Kershaw’s last 5 starts. However, the Cardinals may have already figured out Kershaw’s pitches, as they are 4-0 in Kershaw’s last 4 starts against them. 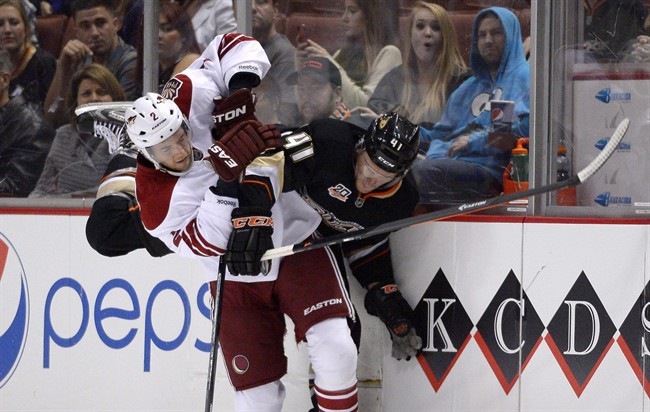 At 5-1-0, the Anaheim Ducks are off to one of their best starts in franchise history. Against the Phoenix Coyotes, they have a chance to secure their best start on home ice.

The Ducks will try to improve to 4-0-0 at the Honda Center, while the Coyotes will look to bounce back from their disappointing defeat against Ottawa. Phoenix has a good opportunity to do just that, as they are 4-1 in their last 5 meetings with Anaheim.