The San Jose Sharks are on the verge of shedding their chokers label. With a chance to close out the Western Conference finals series at home later tonight, can the Sharks eliminate St. Louis? Or will the Blues live to see a Game 7? Read on for more about this game. You can also check out our breakdown of the Raptors vs. Cavs Game 5 here.

The Blues will have to eke out a win in enemy territory later tonight. Otherwise, they’ll be packing their bags for vacation. That much is clear following St. Louis’ 6-3 loss in Game 5 against the Sharks.

Goalie Jake Allen did a fine job of helping his team keep a 3-2 lead in the game but that was until the Sharks’ Joe Pavelski hit twice.

Allen was great in Game 4 (allowed three goals on 34 shots) but let four goals on just 25 shots faced in Game 5. Given that poor performance, Allen may be headed back to his usual backup role later tonight with Ken Hitchcock likely to call on Brian Elliott to start. Elliott was sent to the bench in Game 3 in lieu if Allen after surrendering three goals in 14 shots faced. He has a 9-8 record and 2.34 GAA and .925 SV% in the postseason.

Netminding aside, the Blues need to slap Vladimir Tarasenko in the face or just do anything to wake up the slumping forward. Tarasenko has simply turned into a ghost in the series, as he’s yet to score a goal through five games of the Western Conference finals. He had seven goals and 13 points in the first two rounds of the playoffs. 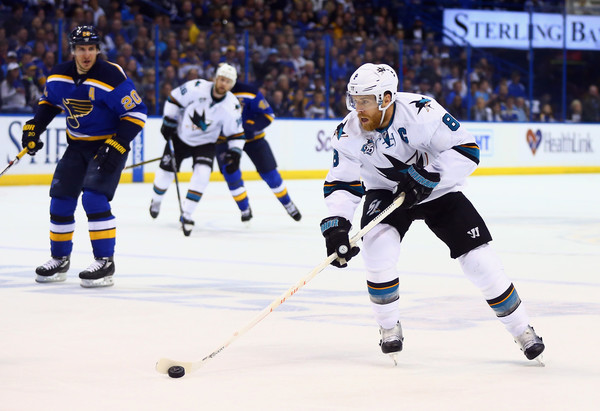 The Sharks are a win away from reaching the Stanley Cup finals.  And they could accomplish that goal with a win later tonight at SAP Center, where they are 6-2 in this postseason.

As mentioned earlier, Joe Pavelski was key to the Sharks’ victory in Game 5, scoring twice and recording an assist to finish with first star honors. It wasn’t all Pavelski, though, as Martin Jones stopped 18 of St. Louis’ 21 shots. After allowing two first-period goals, Jones buckled down to work and held his own in front of the net.

Of course, the Sharks did a good job of keeping the puck mostly in their zone to limit Jones’ workload. They also outshot St. Louis in Game 5, 27-20.

San Jose, who are first in the postseason in goals for per game with 3.41, also devoured St. Louis’ penalty kill, going 2-for-3 on the man advantage on Monday. San Jose is second these playoffs with a 28.3 PP%.