The St. Louis Rams stole the show on Sunday afternoon when they stunned the heavily favored Seattle Seahawks with a pair of trick plays. Still, they were not the only team with an upset in mind as the Kansas City Chiefs ended the San Diego Chargers’ five-game win streak with a late field goal. Which team will keep their momentum rolling forward? Read on as we breakdown this intriguing matchup.

This is just one game in a full card of football action this week. Check out our complete picks and predictions for Week 8 of the 2014 NFL season to satisfy your sports cravings.

The St. Louis Rams were outgained 463-272 in total yards but still managed to defeat the defending Super Bowl champion Seattle Seahawks through a couple of opportunistic trick plays. Stedman Bailey ran for a 90-yard touchdown on a punt return as Tavon Austin faked a catch to draw most of Seattle’s defenders away. Meanwhile, punter Johnny Hekker faked a punt and threw an 18-yard pass which gave the Rams a first down with under three minutes to play.

[sc:NFL240banner ]Overall, the Rams’ offense was excellent as they built a big lead against Seattle. Quarterback Austin Davis completed 18 of 21 passes for 152 yards and two touchdowns. Meanwhile, running back Tre Mason ran for 85 yards and a score on 18 carries. However, they may struggle to get significant yardage against the Chiefs’ defense which is allowing 326.7 total yards per game this season (10th in the league).

On defense, St. Louis managed to tally three sacks against Seattle, after entering the game with just one sack throughout the entirety of the season.  Still, they had difficulty containing Russell Wilson. The Rams allowed the Seattle QB to throw for 313 yards and two touchdowns as well as run for 106 yards and a score on seven carries.

If the Rams don’t fix their defensive holes, they’ll have their hands full against Kansas City quarterback Alex Smith and running back Jamaal Charles. The Rams are 0-5 SU/ATS in their last five meetings with Kansas City.

The total has gone over in the Rams’ last four games. 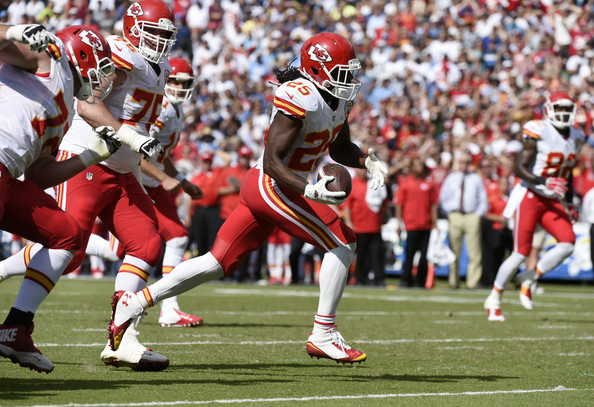 An all-around quality performance led the Kansas City Chiefs to a 23-20 victory to end San Diego’s run of five-straight wins. Alex Smith went 19-for-28 for 221 yards and threw an 11-yard touchdown pass to fullback Anthony Sherman, while Jamaal Charles ran for 95 yards and a score on 22 carries. They will need another big performance to give their fans something positive to take home. The Chiefs are 1-4 in their last five games at Arrowhead Stadium.

However, not all was perfect in their offense as wide receiver Dwayne Bowe cost the Chiefs a first down on a second-half drive when he dropped a pass well beyond the first down marker. Still, Bowe made some big catches late in the game to finish with five receptions for 84 yards.

Smith and Bowe should be able to exploit the Rams’ secondary which has allowed 635 passing yards and four touchdowns in their past two games. Meanwhile, the Rams’ defense is allowing 145 rushing yards per game, which opens the door for a resurgent Charles to continue his great play. The Chiefs running back is averaging 4.9 yards on 55 handoffs in his past three games since returning from an ankle injury.

On the other side of the ball, the Chiefs did well to limit the Chargers’ production. Defensive back Kurt Coleman had an interception, while linebackers Tamba Hali and Justin Houston each had a sack for a combined loss of 23 yards. The Chiefs should be able to beat the Rams’ offensive line as St. Louis have allowed 16 sacks throughout six games this season (11th-most in the league).

The Kansas City Chiefs make a case as a contender for the postseason with a resounding victory. Create a betting account now and start backing your favorite football teams as the NFL hits its midway point.