The St. Louis Rams and Tampa Bay Buccaneers didn’t get off to the most promising of starts this season as they both fell at home in Week 1. The Bucs will get another crack at a first home win when they host the Rams, who could be down to their third-string quarterback when they visit Tampa Bay.

Read on to see who takes home their first  W of the season, both in this game and in our preview of the Saints vs. Browns.

Not a whole lot was expected from the St. Louis Rams’ offense without its injured first-choice quarterback, Sam Bradford, yet somehow, they performed below those already pretty low expectations. The Rams scored just six points – tied for the fewest in Week 1 – as they suffered a 28-point home loss at the hands of the Minnesota Vikings.

[sc:NFL240banner ]Starter Shaun Hill went 8-for-13 for 81 yards with an interception before being replaced in the second half due to an apparent leg injury. Backup Austin Davis took over and went 16-for-23 for 192 yards with a pick in his half of work.

But whoever starts at quarterback should have his spirits lifted after seeing the Tampa Bay defense make a washed up Derek Anderson look like a competent NFL quarterback. The Bucs could hardly generate a decent pass rush to pressure Anderson, which should bode well for the Rams QB.

For the Rams offense to be successful, though, it will need more from the running game. Zac Stacy and co. finished with just 72 yards on 22 carries. But they’ll face a similar problem as they did against the Panthers when they go up against the Bucs’ talented front seven.

Speaking of defenses, big things were expected of the Rams and their talented pass rushers. Instead, they sacked Vikings quarterback Matt Cassel just once as they gave up 27 points; the other seven came from a pick-six on Davis.

That Rams pass rush should be able to find more opportunities to get after Josh McCown, who will lose a key member of his offensive line. A weakened O-line, coupled with more McCown drop backs if the Buccaneer running game continues to struggle, looks like a recipe for more Rams sacks.

The road wasn’t a happy hunting ground for the Rams last season. They went just 2-6 both SU and ATS away from home. 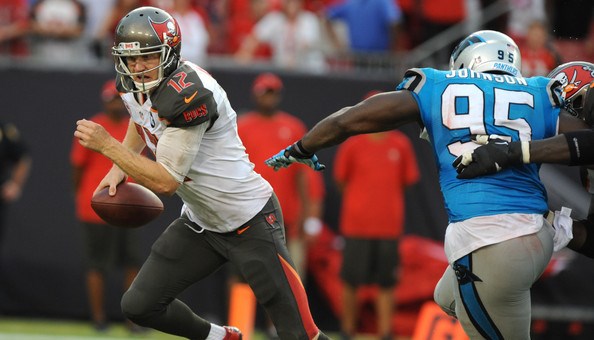 It was a rough debut all around for the new-look Tampa Bay Buccaneers. New head coach Lovie Smith’s defense gave up 20 points at home to a Carolina offense that was missing Cam Newton. Meanwhile, new quarterback Josh McCown was picked off twice, was sacked three times and was held to just 5.2 yards per throw.

But while their Week 1 showing was disappointing, it should be put into proper context. First off, they faced a Panthers defense that’s one of the best in the league. Their quarterback and head coach were making their debuts, and they were making it without their offensive coordinator, Jeff Tedford, who was missing after he had an unspecified medical procedure two weeks ago.

And as bad as they were, they made a comeback in the fourth quarter to pull to within three in the last two minutes. They ultimately lost, but they will have a chance to atone for their errors when they face another backup against the Rams.

Tedford will be back to take care of the offense, the he will have some concerns with his O-line. Guard Logan Mankins, whom the team just traded for from the Patriots, suffered a significant knee injury in his debut. Mankins’ loss to that line would be a huge blow both to the pass protection, as well in their run blocking, which didn’t look all too impressive in Week 1.

Excluding a big 54-yard run, the Bucs managed just 48 yards on 16 carries against the Panthers. Running back Doug Martin, who missed most of last season due to injury, picked up another knock on his leg. Prior to the injury, Martin had run for only nine yards on nine carries.

The Rams’ running game comes to life, while their pass rush batters the Bucs’ beat up O-line. Take the Rams to cover +6 on the road. Create a betting account now and find some great value in NFL road underdogs all season long.