The Detroit Red Wings finally got a win in the first round after subduing the Tampa Bay Lightning at Joe Louis Arena Sunday night. Another win for Detroit later tonight will tie the series swing the momentum in its favor. Will the Red Wings make it two in a row? Or will the Lightning bounce back and move a win away from advancing to the next round? Read on for more about Game 4 of this series. You can also check out our Game 3 preview of Ducks vs.  Preds.

All of a sudden, the Lightning’s offense went radio silent. After generating eight goals in the first two games of the series, Tampa Bay lost its scoring touch during a 2-0 loss to Detroit in Sunday.

The Lightning’s top line of Alex Killorn, Tyler Johnson, and Nikita Kucherov went missing in Game 3, as the trio failed to register a shot on goal. Tampa’s not going to win many games without them getting involved on offense. The Lightning were overpowered in the possession battle with the Red Wings limiting Tampa to only 16 shots on goal, the fewest for Bolts managed thus far this season. That paltry number of shot attempts, however, seems fair for a team that racked up 40 penalty minutes.

With the talent in that top line and with presumed more time playing 5-on-5 hockey next game, expect Johnson and company to be much busier on offense. Johnson torched Detroit for two goals while adding two helpers back in Game 2. Kucherov and Killorn, meanwhile, have three and two goals on the series, respectively.

Ben Bishop and Tampa’s penalty kill were astounding despite the loss on Sunday. Bishop turned away 28 of Detroit’s 30 shots. The Red Wings could’ve had more shots because they did get on the power play seven times, but Victor Hedman and crew did a great job of slowing down the Red Wings’ special teams.  Thus far in the series, Tampa Bay has surrendered just one goal on Detroit’s 17 power plays.

Tampa is 3-1 in its last four games following a loss. 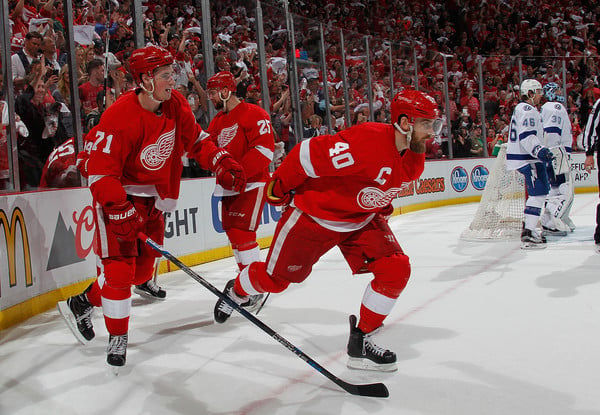 The Red Wings wanted their vets to start scoring. What they got in Game 3 was production from the young and the old, as Andreas Athanasiou and Henrik Zetterberg both lit the lamp on Sunday to help Detroit cut the series deficit to 2-1.

You can’t spell his name, but Athanasiou made Detroit fans remember him when he scored his first career playoff goal in the second period of Game 3. Zetterberg scored the insurance goal minutes before the second intermission. Seeing Zetterberg find the back of the net after a very long time is a shot in the arm of Detroit’s offense that hasn’t scored more than two goals in any of the Red Wings’ last four contests.

Still, the Red Wings continue to have issues on offense, particularly on their power play. As mentioned earlier, Detroit went 0-for-7 on the man advantage.

Petr Mrazek started on goal for Detroit in Game 3 and it looks like he’ll get the call again this Tuesday. Jimmy Howard hasn’t played well in the first two games of the series so Mrazek seems to be the wiser choice for head coach Jeff Blashill. Mrazek had a light load on Sunday, stopping all of Tampa’s 16 shots.

Detroit is 3-0 in its last three home games. The Red Wings have also won all of their last four meetings against Tampa at Joe Louis Arena.