There’s good reason to cancel everything you have on schedule this coming Saturday: the meeting of two undefeated Big 12 teams, namely the No. 5 TCU Horned Frogs and the No. 12 Oklahoma State Cowboys. A win by TCU could bolster its chances for a spot in the College Football Playoff, which is also true for the Cowboys, who could leapfrog a lot of teams in the rankings if they succeed in Stillwater this coming Saturday.

Read on for a preview of this matchup. You can also click here for a breakdown of the matchup between Cincinnati and Houston.

Betting on the TCU Horned Frogs (8-0)

[sc:NFL240banner ]Trevone Boykin’s brilliance was such in TCU’s 40-10 win over West Virginia on Saturday that the opposing coach couldn’t help but give him some due daps.

Boykin was once again in his usual dominant self against the Mountaineers as the quarterback passed for 388 yards and three touchdowns without an interception. Boykin’s favorite target, Josh Doctson, meanwhile, had 183 receiving yards and two touchdowns on 11 receptions. The tandem of Boykin and Doctson has been one of the best in the nation. Boykin is fifth in the FBS in passing yards per game (367.8), while Doctson is first overall in receiving yards (156.3) and second in receiving touchdowns (14).

Oklahoma State’s defense presents a formidable challenge for TCU, but Boykin, Doctson, and running back Aaron Green could blow the game wide open once they all begin to click, regardless of the opponent. Overall, TCU is averaging 48.9 points per game this season.

That offense along with a decent defense that limits opponents down to only 24.5 points per game makes TCU a terrifying team to cross paths with.

Arguably No. 1 on the agenda of the Horned Frogs for the Oklahoma State game is giving Boykin the best protection against Oklahoma State’s top-rated pass rush. Boykin is an elusive quarterback, who is good in avoiding the pass rush, but credit should also go to TCU’s offensive line that has allowed just six sacks this season, the fewest in the conference.

Betting on the Oklahoma State Cowboys (8-0) 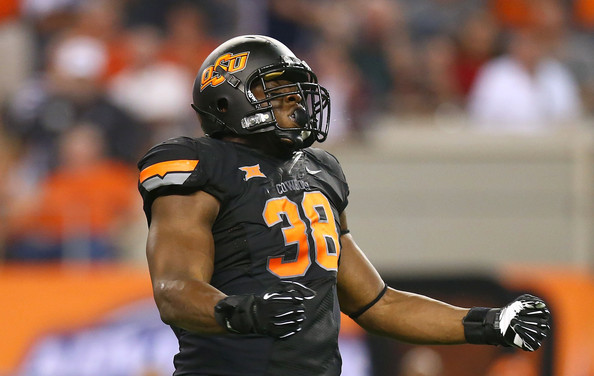 Coming off a 70-53 shootout with Texas Tech, the Cowboys return to Stillwater, where they look to ambush fellow Big 12 undefeated, TCU.

Against Texas Tech, Cowboys quarterback Mason Rudolph passed for 285 yards and a touchdown with an interception on 21 of 35 completions. He’ll have to be better though against a much fiercer TCU defense this coming Saturday.

While the game against the Red Raiders displayed the Cowboys’ potential to decimate their opponents by pouring it on offensively, it’s still not good to for them to see their defense sag a bit. Albeit against Texas Tech—fourth in the nation in scoring— the Cowboys should not be happy about the 642 total yards they allowed the Red Raiders to compile.

TCU is of another level than most teams in the Big 12, so the Cowboys must find their defensive moxie back, particularly against the pass. Oklahoma State’s pass defense is third in the conference, letting opponents produce just 218.5 passing yards per contest.

Pass rushing has been a big key to success of Oklahoma State this season, as the Cowboys are No. 1 in the Big 12 with 30.0 quarterback takedowns. The Cowboys are blessed to have the duo of Emmanuel Ogbah and Jimmy Bean on the pass rush unit, as both are in the top 5 in sacks in the conference, combining for 14.5 total.