The Toledo Rockets hasn’t reached 10 wins since 2001, but they have a chance to finally nail that feat this coming December 22, when they play the Temple Owls in the Marmot Boca Raton Bowl. Both the Rockets and the Owls are coming off losses in their respective conference championship games, so the showdown in Boca Raton gives these two teams a big opportunity to cap their year with a bang.

We know Marmot Boca Raton sounds a bit funny, but it can’t hold a candle to some of those you’d read in our list of the top 10 worst bowl game names ever.

[sc:NCAA240banner ]What a time for Jason Candle to have his first game as coach of the Rockets. With Matt Campbell’s resignation late November to sign with Iowa State, the former offensive coordinator Candle was promoted to head coach status and would be at the helm when the Rockets face Temple in Boca Raton.

The Rockets may have a different coach, but expect them to have the same approach in the bowl game, which is rushing the ball a lot and playing stingy defense on the other side of the ball.

The Rockets’ offense will be fueled by their two-headed backfield in Kareem Hunt and Terry Swanson. Both running backs have been effective this year for the Rockets, who finished the season No. 1 in the Mid-American conference with 213.2 rushing yards per game. Hunt paces Toledo with 894 rushing yards and 10 touchdowns, while Swanson was right behind him with 870 yards and seven scores.

It’s not that easy to break Temple’s vaunted defense, though, so it would take a solid effort from the Rockets’ passing game to wedge a bigger space for Hunt and Swanson to burst through.

With Phillip Ely under center, the Rockets were able to complement their backfield with a respectable passing offense that enters the Boca Raton Bowl averaging 250.1 yards per game, 41st in the nation.

Ely has played well of late, as he’s averaged 270.0 passing yards with five touchdowns and only one interception in the last three games.

Toledo isn’t too shabby defensively either. The Rockets are 23rd in the nation in scoring defense (21.1 points allowed per game) and 52nd in total defense (378.8 yards). 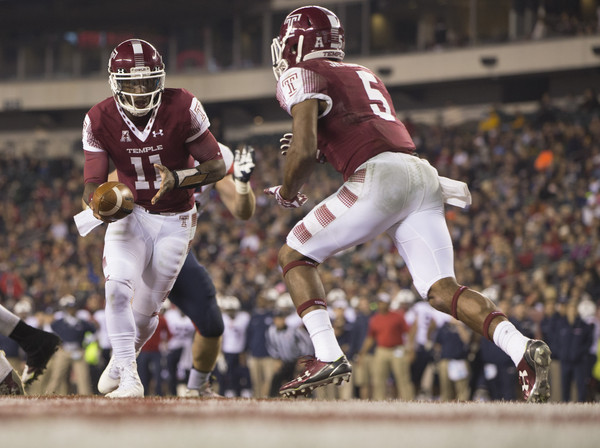 The Owls were on track at making it to one of the New Year’s Six bowl games, but three losses after a 7-0 hot start ultimately shelved their big dreams. Instead, the Owls will have to contented playing Toledo in Boca Raton.

Despite the Owls’ second-half mishaps that include a 24-13 loss to No. 19 Houston in the AAC championship game on December 5, they should remain an imposing team to face for Toledo. For one, the Owls possess one of the best defenses in the nation. Temple’s stop unit is 16th in the nation in scoring defense, as they allowed just 19.2 points and 329.5 total yards in previous games.

They’ll have their hands full against the aforementioned rushing attack of Toledo, but with linebacker Tyler Matakevich leading Temple’s defense, there’s a good chance that the Owls would cripple this aspect of the Rockets’ offense. Matakevich recently won the Bronko Nagurski Award, which is given to the nation’s top defensive player.

On offense, Temple will look to take advantage of Toledo’s susceptible pass defense. While Toledo is among the best defensive teams in the nation like Temple, the Rockets are just 12th in the MAC in passing defense with 263.3 passing yards allowed per game.

Quarterback P.J. Walker (2,737 passing yards, 19 touchdowns, and seven interceptions) will look to hook up in this game with Jahad Thomas, the team’s biggest threat down field. Thomas enters the game with 1,257 receiving yards and 17 touchdowns on the season. Thomas, however, only had one catch for six yards in the loss to Houston. Others will have to help like Robby Anderson, who came out of nowhere to catch 12 passed for 150 yards and a touchdown against the Cougars.