The West Virginia Mountaineers had lost four straight against ranked opponents, but that didn’t stop them from scoring a big upset on Monday as they came from behind to defeat No. 8 Kansas. The Mountaineers face another uphill battle when they travel to Oklahoma State against the No. 22 Cowboys.

Can the Mountaineers mount another win over a ranked opponent? Read on as we give you everything you need to know heading into this Big 12 game.

Saturday is a big day in college hoops. Check out the complete previews for Auburn vs. Kentucky and Clemson vs. Duke.

Juwan Staten didn’t mind the leg cramps. Playing in his final year of eligibility, he wasn’t going to leave West Virginia without seeing the program get 20 wins for the first time in his college career. He scored 20 points, including the go-ahead basket with four seconds remaining, to give the Mountaineers their first 20-win season in four years.

[sc:NCAAB240banner ]The senior guard faces another tough task on the road in the Cowboys. He hasn’t won at Oklahoma State in two tries since 2013. The Mountaineers have also struggled on the road going 1-3 SU/ATS in their last four games.

If Staten racks up the points, then the Cowboys may be forced to double-team the senior guard. Leaving him open may prove to be devastating as he ranks fourth in the Big 12 with 14.5 points per game. He can still do damage even when facing some tough defense by dishing out dimes to his teammates. Staten leads the team with 4.6 assists per game.

Devin Williams may be the primary beneficiary of some of Staten’s assists. Williams is the team’s second highest scorer (11 points per game), but he’s failed to score in double-digits in three straight games. He could continue to struggle from the field as Oklahoma State has one of the best defenses in the nation allowing 60.4 points per game (44th).

Nevertheless, West Virginia can breathe some life in their rough road stretch if they can dominate the boards through Williams. He leads West Virginia with 8.1 rebounds per game. He has 18 rebounds in the last two road games.

The total has gone under in five of West Virginia’s last seven games.

The big games are about to come. Create a betting account now and don’t miss a beat in the most entertaining stretch of the college basketball season. 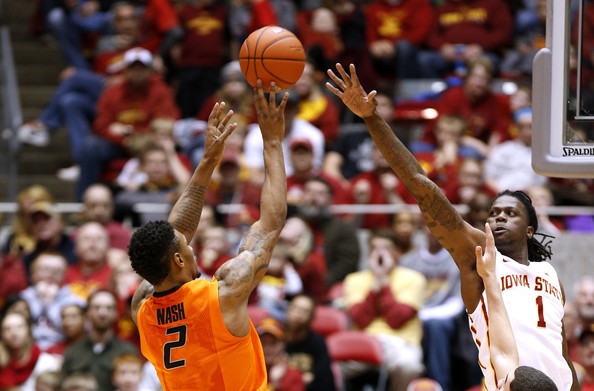 No. 22 Oklahoma State had a wonderful five-game winning streak against ranked teams, going 4-1 SU/ATS against Baylor (twice), Oklahoma, Texas and Kansas just a few days ago. The Cowboys then followed that up with back-to-back losses, a blowout loss to unranked TCU and a home loss to No. 14 Iowa State.

The home loss to Iowa State may just be an anomaly. Oklahoma State is a pretty formidable team at home, going 7-3 ATS in its last 10. The Cowboys have been a dominant team on their own floor this season with an average scoring margin of +11.8 (they only average +5.3 overall in the season).

The Cowboys have dominated their opposition on their home turf with two of the best scorers in the Big 12. Le’Bryan Nash ranks second in the Big 12 with 17 points per game, while Phil Forte III trails just behind with 16.5. Anthony Hickey Jr. has also averaged in double-figures over that stretch with 11.3 points per game.

But Nash and Forte have not reached their marks in their last four home games, each averaging just about 14 points. The Cowboys also don’t have much of a bench to relieve their starters. Over the last two games, the Oklahoma State bench has scored a total of 11 points. In contrast, West Virginia’s bench scored 45 in its last two games.

When it’s time to dig deep, the team with the deeper bench thrives. West Virginia steals the win and cover in this game.