What Can the Tampa Bay Lightning Do to Win the Stanley Cup Without Ben Bishop?

If Game 4 of the Stanley Cup Finals is any indication of what lies ahead in the series, many fans and critics would have the Chicago Blackhawks now as the runaway favorite to win the Stanley Cup. The Blackhawks tied their series with the Tampa bay Lightning at two games apiece on Wednesday with a 2-1 victory.

Tampa Bay played without its star goalie Ben Bishop in Game 4, who is still day-to-day in dealing with an undisclosed lower-body injury since Game 2 of the Finals. 20-year old Andrei Vasilevskiy started in Bishop’s place on Wednesday, and did a good job of limiting Chicago’s offense to just two goals.

Nonetheless, the Lightning still lost Game 4, and the absence of Bishop definitely hurt the young Florida squad’s chances of winning that game, and quite possibly the series. Can Tampa Bay still win it all despite losing their goalie that has the most wins in this postseason?

Read on as we tackle the key factors that the Tampa Bay Lightning must consider for the rest of the Stanley Cup Finals. And don’t forget to check out our preview for Game 5.

What Can the Tampa Bay Lightning Do to Win the Stanley Cup Without Ben Bishop?

Lightning Should Strike More than Twice

If there’s anything positive that Tampa Bay can take from Game 4, it’s that it only lost by one goal. The youth of the Lightning must pounce on the scoring opportunities fast and in bunches, as they cannot afford to get into close battles against a very experienced Blackhawks team.

[sc:NHL240 ]Prior to their series against Chicago, eight out of the Lightning’s 11 postseason victories were won by a margin of two goals or more. In the finals, all four contests have been decided by just one goal– the first time that this has happened in the Stanley Cup Finals since 1968.

And speaking of twos, Tampa Bay’s two young superstars in the making should be up to the task of producing points. Tyler Johnson and Nikita Kucherov have been the best one-two punch in this year’s playoffs. Johnson and Kucherov have put up an NHL-best 23 and 20 points, respectively, this postseason. However, they’ve only combined for two goals and three assists in the finals against Chicago.

Luckily for the Lightning, they still have defenseman Victor Hedman pitching in on offense. Hedman has four assists in the finals, and leads all Tampa Bay players in the playoffs with a plus/minus of plus-12. Furthermore, the Lightning produced 27 more shots on goal than the Blackhawks through four games in the finals whenever Hedman was on the ice. That just goes to show the kind of impact that the 24-year old has on both ends of the rink in this series.

Don’t Be “Russian” to Conclusions

It’s easy to dismiss a team as an underdog whenever their top player misses critical games due to an injury. Andrei Vasilevskiy is certainly no equal to Ben Bishop at this early point in his career, but his Game 4 performance was not as bad as it seemed on paper.

Ultimately, the Lightning lost the game. But again, they only lost by one goal. The bigger concern from Wednesday’s game was not entirely why Bishop’s backup gave up two goals, but rather why Tampa Bay only managed to score one goal. Vasilevskiy had 17 saves in Game 4, including an exemplary showing at protecting the net from a flurry of Chicago’s shots in the final minutes of the game.

Vasilevskiy didn’t earn his shot at the big leagues without a bit of talent. The 20-year old had a career save percentage of .985 in six seasons for the Russian Juniors (five) and Seniors (one) National teams, and was part of Russia’s Ice Hockey World Championship team in 2014.

The Russian upstart must now prepare for the games ahead, and try to contain Chicago’s top forwards Jonathan Toews and Patrick Kane. The duo managed only a total of one point through the first three games of the finals with Bishop guarding the net, but Vasilevsky surrendered a goal to Toews in Game 4, and Kane added an assist of his own. Look for Vasilevskiy to hold his ground much better for the rest of the series against the attacking front of the Blackhawks.

Turn your predictions into cash and create a betting account now.

You Know the “Rest”, But Not All About It 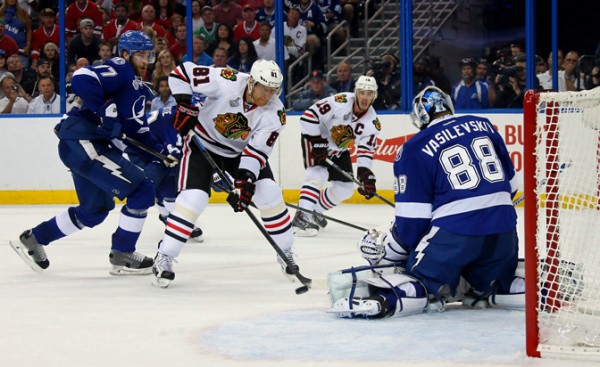 Now for the wild card: the nature of Bishop’s injury has yet to be disclosed by the Tampa Bay organization, so even the pundits are in the dark as for what the goalie is actually dealing with right now. We won’t have any timetable speculations for his return without any specifics, apart from the injury being around Bishop’s “lower body”.

With Bishop sitting out Game 4, he has four whole days of rest before Game 5 to rehabilitate his wounded self.

Things are not as bad as it seems for Tampa Bay. There are still two or three games left to play, all four games in the finals so far have been tightly contested, and the Lightning still have home ice advantage. But the sooner we know about Bishop’s condition for the rest of the finals, the better the chances of Tampa Bay winning the Stanley Cup would be.

Bishop played 23 games in this postseason, where he has a .919 save percentage on 49 goals allowed. The Tampa Bay Lightning are 13-9 in the playoffs with him as their starting goaltender.