Former Heisman Trophy Winners – Where Are They Now?

The Heisman Trophy has been awarded since 1935 to young men who wowed the world of college athletics through their performances on the gridiron. These are players with names like Doak Walker, Paul Hornung, Bo Jackson and OJ Simpson. Maybe you’ve heard of them before?

According to the Heisman committee, the award is given to:

“The outstanding college football player whose performance best exhibits the pursuit of excellence with integrity.”

Such an accolade would lead us to believe that these individuals almost always go on to do great things — and in many instances, this assumption holds true. [sc:Other250banner ]

Take Bo Jackson for example, who played for the Oakland Raiders of the NFL and was an All Star selection in the MLB. Bo also had a relatively successful acting career, earning roles on The New Adventures of Superman, Married with Children and everybody’s favorite, The Fresh Prince of Bel-Air.

Then there’s Pete Dawkins, who won the award in 1958. He was a Rhodes Scholar, won a Bronze Star fighting in the Vietnam War, ran for a position in the US Senate and was CEO of Primerica.

Herschel Walker danced in a professional ballet, competed in the Winter Olympics and had a short but successful MMA career.

But it seems for every great Heisman winner in history, there’s another who more or less flopped.

Billy Cannon, after a solid ten years in the American Football League, wound up in a counterfeiting operation that saw him print $50 million worth of fake US bills and hide them in ice chests buried in his backyard. After serving half of a five year sentence, he struggled to reopen his dental practice. He ended up grabbing a position as a dentist at the Louisiana State Penitentiary.

Eight former winners never went on to play in a regular season professional game, ending up with gigs at factories, shoe stores and as construction workers.

We all know what happened to OJ Simpson.

So scroll down and see for yourself what these former college stars have been up to. Some of these individuals are hard to track down, and the graphic may not be completely comprehensive, but we feel it’ll give you a pretty good idea of…

What Happens to Heisman Trophy Winners?

Click on the picture enlarge it in another window. 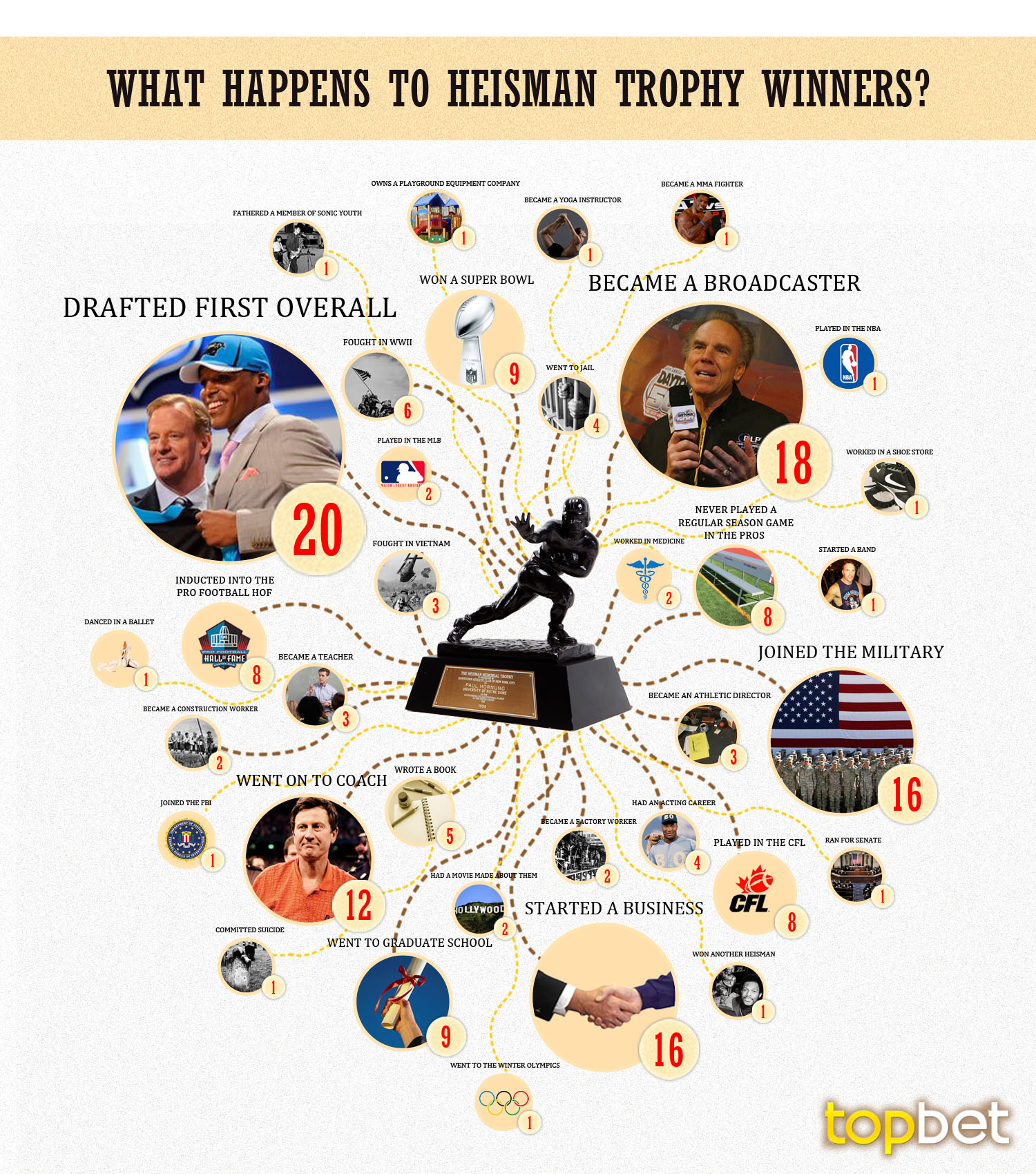