What is A Jeweled Shillelagh?

Part of college football’s appeal and tradition is the gratuitous amount of trophies and awards being awarded to deserving programs and players. Sure, there’s no bigger award than the national title itself, but there are some overlooked and very fascinating hardware that you may not have heard of before, such as the Jeweled Shillelagh.

If this is the first time that you’ve encountered that phonetically-challenged term or if you’ve heard it only in passing amongst your peers before, this here feature will enlighten you on the matter which, in turn, will make your collegiate pigskin viewing and betting action all the more intriguing indeed.

The Jeweled Shillelagh: A Little-Known Pot of Gold at the End of the College Football Rainbow

Just What Exactly is the Jeweled Shillelagh?

Simply put, the Jeweled Shillelagh (pronounced as “shuh-ley-lee”) is the trophy awarded to the winner of the annual college football game between the Notre Dame Fighting Irish and the USC Trojans.

Strictly speaking, a shillelagh is an Irish club made of either oak or blackthorn wood, which are commonly found in the wilds of Ireland. The Jeweled Shillelagh was first introduced by the Notre Dame Alumni Club of Los Angeles in 1952 to commemorate the rivalry between their alma mater and the University of Southern California, which originally began back in 1926. The ND Club of LA had this to say about the Gaelic artifact upon its inception:

“This shillelagh will serve to symbolize in part the high tradition, the keen rivalry, and above all the sincere respect which these two great universities have for each other.” 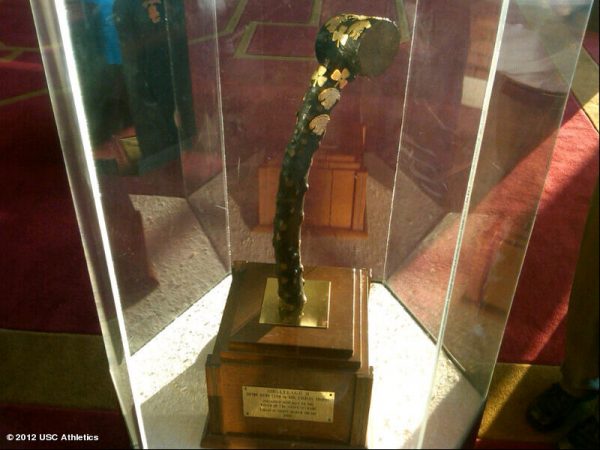 The annual winner between these two schools is awarded with a jeweled ornament that’ll be placed on the club itself. A Notre Dame victory is signified with an emerald-encrusted shamrock with the year and final score of a particular game, while a ruby-studded Trojan head of similar detail represents a win for USC. In the event of a tie, a medallion with a combination of both ornaments is added to the wooden staff.

By 1989, the original Jeweled Shillelagh had to be replaced with another of its kind after the former ran out of space for the jeweled ornaments. The first Jeweled Shillelagh has since been retired and is now kept safely in Notre Dame’s campus. The second version of the decorated club (pictured above) was created in 1995, which was made slightly longer than its predecessor to make room for more ornaments in future meetings. It was made right before USC’s win in 1996 that snapped Notre Dame’s 13-game win streak in the rivalry at the time.

The Notre Dame-USC Rivalry Over the Years

In 87 lifetime meetings, Notre Dame currently has the lead with an overall record of 46-36-5.

By 2002, though, USC started to prove that it’s the better team of the rivalry shortly after the turn of the new millennium by reeling off eight-straight victories over the Fighting Irish from then up to 2009. However, the Irish have found their swagger once more in this decade, winning four of the last six meetings from the 2010 to date (also at 4-2 against the spread during that span).

There hasn’t been a tie between these two programs since 1994. And given the NCAA’s changes to overtime rules in 1996, we likely won’t witness any such draws in this rivalry any more.

Looking Ahead to This Week’s Season-Finale Showdown

This Saturday, November 26, the storied clash between Notre Dame and USC returns to the Los Angeles Memorial Coliseum, where the Trojans will host the game as -17 favorites over the Fighting Irish.

Head over to our complete preview for this storied clash in the link provided here. 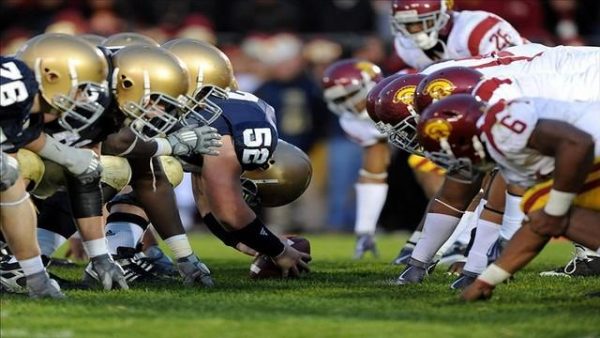 Think you know who’ll be the one to hoist the coveted Jeweled Shillelagh this season? Create a betting account now to put your prediction for USC and Notre Dame’s clash this Saturday to the test along with your other college football predictions!