Why Did Magic Johnson Draft Lonzo Ball – A Writer’s Opinion

This NBA offseason, much of the talk has revolved around either free-agent signings (Gordon Hayward, Chris Paul), possible trades (Kyrie Irving, Carmelo Anthony), or the daily life of the Ball family.

While LaVar Ball continues to soak up the media with his brazen attitude, it’s really his eldest son, Lonzo Ball, who should be drawing all the attention. The Los Angeles Lakers used their second-overall pick to nab the former UCLA standout at this year’s NBA Draft, but why exactly did Lakers president for basketball operations Magic Johnson go with Ball considering all the external noise surrounding the 19-year-old prodigy?

Here are three reasons why Magic is confident that Lonzo is indeed the Lakeshow’s next big superstar.

Best Value on the Board

Many would say that the 2017 class of NBA rookies is the most talent-abundant group in recent memory, and that Ball could easily be the first overall pick as much as the ninth or 10th overall pick.

In actuality, Ball possesses uncanny smarts on the hardcourts, which is hard to find nowadays with point guards looking to score first to keep up with the rest of the league’s high-scoring ways rather than dish out the extra pass. In turn, the Lakers got a young floor general that could very well be the next heir apparent to Magic Johnson himself, which we’ll also tackle a little bit deeper later on.

The Next Hometown Hero

Having been born in Anaheim, and playing in Chino Hills then in UCLA during his respective high school and collegiate years, Ball is a bona fide SoCal native. Lonzo, along with his family, embody what folks from Los Angeles are like.

Ball’s status as a California kid goes beyond being just the inevitable and rightful savior of the Lakers franchise. His ties to the local community also makes him quite the celebrity around the Tinseltown, which could eventually lead to more endorsements and off-court activities for the Lakers that would also expand the NBA’s exposure to the tough yet lucrative market in Southern California that’s currently being shared by their neighboring rivals in the Pacific, the LA Clippers.

In a recent interview, Johnson stated that having Ball as the future of the franchise would mean that free agents from around the league would be more enticed to join the Lakers.

Los Angeles has lost its luster as a prime destination for NBA players for about half a decade now, and Johnson believes that it’s Lonzo who’ll revitalize the franchise’s appeal not only as a big-market organization, but also as a true and consistent title contender once more similar to the days when Kobe Bryant and Magic were running the show.

Being the selfless player he was, Johnson sees a lot of himself in Ball. As statistical proof, the 19-year-old wunderkind took home MVP honors from the recently-concluded Summer League in Vegas, averaging 16.3 points, 9.3 assists and 7.7 rebounds through eight games. Ball even record two triple-double performances; a feat that Magic was also known for and which heralded him as one of the best point guards in NBA history.

As it stands, Ball’s skills coupled with the wise guidance from Johnson could indeed turn him in to the next legendary Laker. 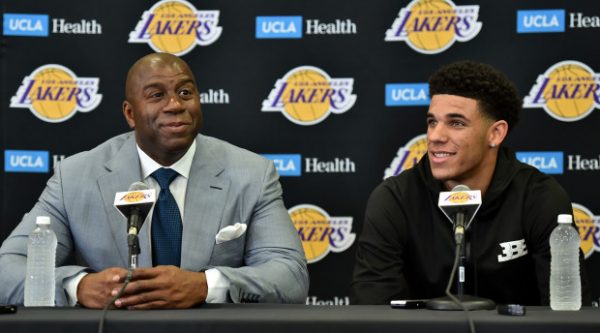 Create a betting account now to place some stakes on NBA futures before the regular season tips off!