The Oregon Ducks had a good 2013 season, their first under head coach Mark Helfrich, which saw them go 11-2 overall and 7-2 in the conference. However, they were edged by the Stanford Cardinal in the Pac-12 North and the loss cost them a trip to the Pac-12 Championship Game.

How far can Marcus Mariota and the vaunted Oregon offense take the Ducks in the 2014? Read on for everything you need to know about the players and news that will define the season, and don’t miss our list of the best games of the 2014 college football season.

Quarterback Marcus Mariota had a spectacular sophomore campaign, recording 3,665 passing yards and 31 touchdowns in 2013.  Mariota can also rush the ball himself as he put 715 rushing yards with nine touchdowns last year.

[sc:NCAA240banner ]Mariota isn’t just a good player; he has also shown excellent leadership skills. The two-time All-Pac-12 honoree is knocking on the NFL door. With his skills, he easily has the potential to be a franchise quarterback. In the meantime, Mariota will once again play for the Oregon Ducks to further hone his skills and help the Ducks challenge for the championship.

Oregon owns one of the best offensive games in the NCAA. They’re ninth in college football when it comes to their rushing offense. This aspect of offense is led by two of the best running backs in the Pac 12, Byron Marshall and Thomas Tyner. Marshall had 1,038 rushing yards for 14 touchdowns in 12 games last season. On the other hand, Tyner had 711 yards for nine touchdowns.

The Ducks also rank third in the Pac 12 for receiving yards per game with 87.7. They are led by wide receiver Josh Huff who had 1,140 yards with 12 touchdowns. Oregon is very well-rounded when it comes to scoring. With the passing and rushing offense getting them good results, Mariota will never run out of weapons to lead the team to a potential championship. 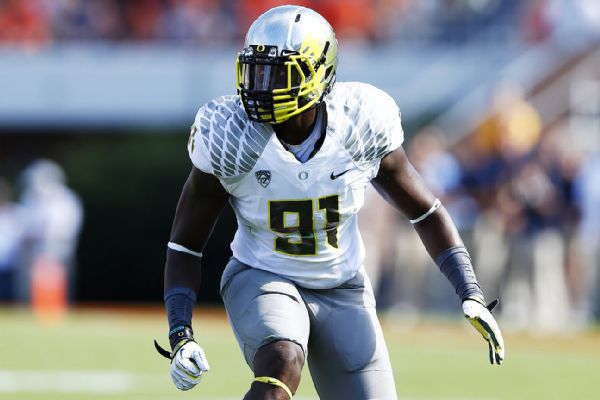 However talented the team is offensively, there is a concern that the defensive front is physically weak. If the Ducks’ d-line doesn’t improve in the upcoming season, they can expect to find themselves being overpowered by bigger, stronger opponents.

Junior college transferee Tua Talia will help, but this is still a unit that could sink the Ducks’ hopes this season.

The game will also feature some intriguing on-field matchups as Mariota will have to deal with Michigan State’s pass rushing beast Shiliqe Calhoun. Michigan State will also test Oregon’s defense with quarterback Connor Cook and wide receiver Jeremy Langford leading the offense. This game will give a clear message as to how far Oregon can go in the conference and if they have a shot at making the College Football Playoff.

Oregon is +600 to win the National Championship.

The Oregon Ducks will finish the season 10-2 SU losing only to Michigan State and Arizona.