With the ink now dried from the top high school prospects signing their letters of intent, the last truly significant piece of college football-related news has also dried up until spring camp. That leaves plenty of time to dissect each school’s newly-minted recruiting class from top to bottom.

To get set for the college football season that will be, read on below for a breakdown of how the biggest and best programs fared in their recruitment and how it will impact their chances for the national championship.

It’ll be a long offseason, so spend it wisely by brushing up on your college football rivalries, like the Victory Bell rivalry between USC and UCLA.

Most Improved – USC, UCLA, and Auburn

Los Angeles was the big winner on signing day as the city’s two big schools – USC and UCLA – came away with some shiny new recruits.

[sc:NCAA240banner ]USC landed the No. 1 cornerback (and No. 4 prospect overall) in the class in Iman “Biggie” Marshall to line up opposite last year’s top recruit, Adoree’ Jackson. Marshall headlines an incredibly strong recruiting class by head coach Steve Sarkisian that was ranked No. 1 by recruiting site Rivals.com. The Trojans are priced at +1,200 to win the national championship and this bumper crop of freshmen will be crucial in whatever success they achieve this year.

Not to be outdone by their crosstown rivals, UCLA landed a handful of top recruits, with tight end Chris Clark, running back Soso Jamabo and guard Josh Wariboko all headed to Westwood. The Bruins are +2,500 to win the national championship, and they’ll be led next season by the class’ headliner, five-star quarterback Josh Rosen, the top-rated QB prospect in the nation, who will look to succeed the departed Brett Hundley under center.

Finally, Auburn’s new defensive coordinator Will Muschamp will have some impressive players to work with in his first year as the Tigers landed the class’ No. 1 overall prospect, defensive end Byron Cowart. Cowart will be joined by four-star linebackers Jeffery Holland and Darrell Williams. The likelihood of a suddenly improved defense under Muschamp has the Tigers at +2,500 to win.

Jim Harbaugh was always going to face an uphill battle after coming in so late in the recruiting game, and not even he could salvage much out of his first class. He was unable to flip any of the top prospects to Ann Arborn, and thus Michigan’s class was ranked way down at No. 40 by ESPN and No. 49 by Rivals. With a substandard incoming class, Harbaugh and the Wolverines are rightly +10,000 longshots.

Meanwhile, TCU is a big +700 favorite to finally make (and win) the 2016 College Football Playoff, but its incoming class doesn’t project to have a significant impact in any title run. The Horned Frogs’ class, which was ranked No. 37 by ESPN and No. 34 by Rivals, has just one incoming four-star recruit in cornerback DeShawn Raymond. 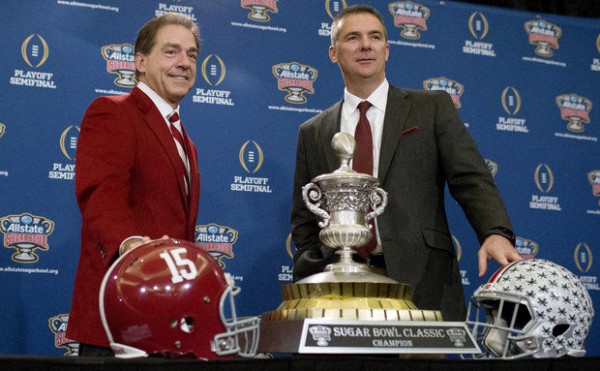 The rich just got richer as three of the four inaugural CFP participants – Alabama, Florida State and Ohio State – all produced top 10 recruiting classes this year. Master recruiter Nick Saban netted yet another top-ranked class (No. 1 in ESPN and No. 2 in Rivals) for the Tide (+800), which includes four five-star recruits.

Not to be outdone, the Noles have five five-star commits (most in the country), but the absence of a bona fide stud to fill the Jameis Winston-sized hole at quarterback has limited the Noles to just +3,000 to win a second national title in three years.

And last but definitely not the least, defending champion Ohio State is a +450 favorite to repeat, and it’ll be aided by another incoming class considered by ESPN as No. 6 in the country. The Buckeyes will have Heisman candidates aplenty in their backfield next season, and a bumper crop of 14 four-star commits should give head coach Urban Meyer some considerable depth next season.

The Longhorns missed out on a stud quarterback in Kyler Murray, who kept his commitment to Texas A&M, but Charlie Strong’s first full recruiting class was good enough to land in the top 10 of ESPN’s rankings. Five-star linebacker Malik Jefferson headlines a class which will hopefully be the first step in the rehabilitation of Texas’ once-great program, which is a +4,000 outsider for the national title.

And over at Florida, new head coach Jim McElwain hit the ground running by keeping former head coach Muschamp’s top 10 commits – offensive tackle Martez Ivey (No. 5) and defensive end CeCe Jefferson (No. 9). Holding on to those two helped save the class for the Gators, but the lack of a promising quarterback option keeps the Gators as +6,000 longshots for another championship.

With its incredible depth at quarterback, Ohio State has the upper hand on its competition and bags home another national championship in 2016. It’s never too early to make college football futures picks. Create a betting account now and get wagering on next season’s national champs.