Being a college student at the University of Florida must be tough. If the lure of the sun and the beach aren’t enough to get those kids to skip their classes, they also have a great football team that they’d much rather watch than some boring professor.

Of course we want our youth to be responsible and go to class, but there are some exceptional contests that just can’t be missed by Gators fans.

Florida’s first conference showdown will come against Tennessee, who are on an eight-game losing streak against their SEC East rivals. The Gators absolutely pummeled the Vols on the ground in last year’s affair, rushing for 336 yards and two touchdowns while scoring the final 24 points of the game. 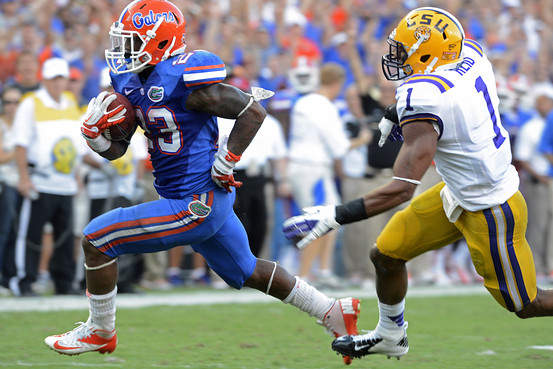 Florida will face its first ranked opponent when it travels to Baton Rouge to take on the always dangerous LSU Tigers. The Gators pulled off an upset victory last year over their annual SEC West rivals as Mike Gillislee ran for a career-high 146 yards and two touchdowns. Les Miles and the Tigers will be out to make sure that won’t happen again. Gators fans looking for a nice get-together should hop in a car and head on over to Jacksonville when “The World’s Largest Outdoor Cocktail Party” starts up again between Florida and Georgia.

The Bulldogs are on a modest two-game winning streak against their SEC rivals, including last year’s 17-9 victory over the then-No. 2 ranked Gators. Will this be the year the Gators take the Okefenokee Oar back to The Swamp?

Florida’s trip to South Carolina will probably be the last time Gators fans see their team go up against the NFL-bound Jadaveon Clowney. Clowney and the Gamecocks will be out for some revenge after being humiliated 44-11 in their last meeting. Although Florida football teams have fared well against South Carolina, the Gators will certainly face a tough test in their last road game of the season.