The Carolina Panthers and Arizona Cardinals meet for the second-straight postseason. But while the two faced off during last year’s wild-card weekend, they will do so in the NFC Championship game on Sunday for a spot in Super Bowl 50.

The Cards played a second-straight subpar game at home and just barely got by the Green Bay Packers in overtime. Can they finally sort out their issues as they visit the No. 1 seed Panthers, who smoked the Seattle Seahawks on Sunday?

[sc:NFL-NFC250 ]Read on for our complete breakdown of the NFC Championship game. And for a similarly in-depth preview of the AFC title game between the Pats and Broncos, click here.

It’s now two-straight games that the Arizona Cardinals have not looked quite right. After getting stomped 36-6 by the Seattle Seahawks in Week 17, the Cards were once again far from their best on Saturday against the Packers.

[sc:NFL250 ]They couldn’t get their ground game going at all, and had a tough time stopping the run themselves. Carson Palmer, who’s dealing with an injury to the index finger of his throwing hand, struggled at times and made a bunch of uncharacteristic mistakes. He also wasn’t helped by an offensive line that couldn’t hold back the Packers’ pressure.

Nevertheless, the Cards overcame a potentially demoralizing Hail Mary at the end of regulation to eventually beat the Packers, 26-20, in overtime.

Palmer and the Arizona offense will come up against an even more impressive defensive unit in Carolina, but don’t count out a bounce-back effort from a Cardinals attack that finished No. 2 in scoring offense this season (30.6).

The Cards should be able to move the ball just fine with their talented receivers – John Brown, Michael Floyd and Larry Fitzgerald. Fitzgerald had another outstanding postseason performance with eight catches for 176 yards and the game-winning score against Green Bay. He now has 912 yards and 10 TDs in just eight career playoff games.

Meanwhile, the aggressive Arizona defense can take away a couple Carolina’s top offensive weapons, namely the running game and tight end Greg Olsen, Newton’s favorite target. The Cardinals were No. 2 against the run per DVOA this season, and were No. 7 in defending opposing tight ends.

Create a betting account now and cash in on all the conference championship action. 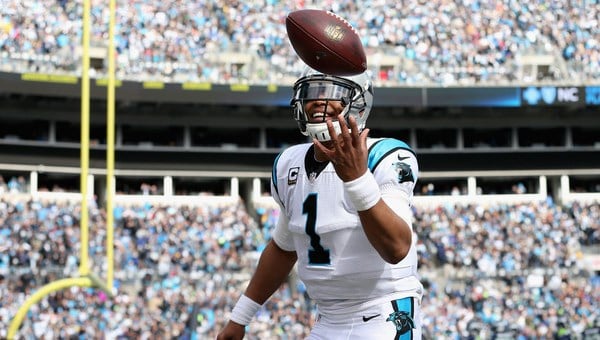 It took all of 30 minutes for the Carolina Panthers to effectively dispatch the very dangerous Seahawks in their NFC Divisional showdown. The Panthers scored all of their points in the first half as they won 31-24 and advanced to their first conference title game since 2006.

Cam Newton didn’t have the most impressive numbers – he finished 16-of-22 for 161 yards and a touchdown – but the running game had a big day with 144 yards and two touchdowns. Jonathan Stewart, who sat out the last three regular season games, showed no signs of rust as he went for 106 yards on just 19 carries and scored both touchdowns. Meanwhile, the defense forced two more turnovers, and returned one for a touchdown.

Newton, the likely NFL MVP, has been sensational this year. He threw for 35 touchdowns (tied for second in the NFL) and rushed for 10 more scores as he masterfully orchestrated the league’s top-scoring offense (31.3 points per game).

Newton’s ability as a dual-threat QB will be key in keeping the Cards’ blitz-happy defense off-balance. Newton had 198 passing yards and two touchdowns as well as 35 rushing yards in the Panthers’ 27-16 playoff win over Arizona last season.

The Carolina defense will face a much more competent Cardinals offense compared to the one it saw last season, but the Panthers D has improved exponentially as well. They Panthers were No. 6 in scoring defense (19.3 points allowed per game) and No. 1 by some margin in forced turnovers (39) during the regular season.

That formidable defense, along with terrific home-field advantage, will make the Panthers very hard to beat at home. Carolina has gone a perfect 12-0 in its last dozen games, and is 8-4 ATS. Moreover, the Panthers have averaged 37.6 points per game over their last five at home.