The Ravens and Browns bring two surprisingly strong rushing attacks into a critical AFC North tilt that will help establish which team could challenge the Cincinatti Bengals in the division.

Read on for more on this gritty game and don’t miss our breakdown of Steelers vs. Panthers and Seahawks vs. Broncos for a full taste of the Week 3 NFL action.

The fun may have come to Cleveland sooner than anyone expected it would. After pushing the Steelers right to the wire in Week 1, Cleveland made good on their potential in Week 2, handing a major upset to Drew Brees and the New Orleans Saints with a fourth-quarter thriller that ended 26-24 Browns. It was the first home opener the Browns have won since 2004.

[sc:NFL240banner ]Brian Hoyer has made the world forget about the preseason controversy around which player would start at quarterback for the Browns. Though Johnny Football did see some brief, inconsequential action in Week 2 (going 0 for 1), Brian Hoyer was the story once again throwing 204 yards on 24-for-40 passing and a touchdown.

Hoyer will need to keep up the magic in Week 3 against the Ravens for the Browns to maintain their competitive start to the season against a Ravens defense that held Ben Roethlisberger and company to 202 yards passing in Week 2. He will want to continue to lean on a rushing attack that has not suffered in Tate’s absence, averaging 152.5 yards per game and ringing up three touchdowns in two games.

Terrance West, in particular, has looked every bit of the playmaker he was expected to be, becoming the first back to put up 90+ total yards in his first two games as a pro since Chris Johnson and Matt Forte in 2008. The Ravens have yet to allow a rushing touchdown this season. 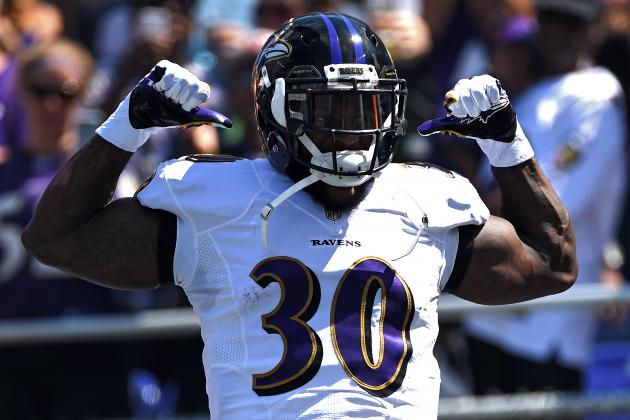 Amidst one of the ugliest scandals in a league history that is littered with them, the Baltimore Ravens came out and played a confident, deliberate game plan while taking apart the Pittsburgh Steelers 26-6 in Week 2.

Joe Flacco bounced back from a poor Week 1 to throw two touchdowns in the victory, continuing his legacy as a Jekyll-and-Hyde signal caller. Flacco got it done with a steady feed of short outlet plays, completing 21 passes for five yards of fewer. When the game was over, Flacco had amassed his best completion percentage (72.4%) since the beginning of last season.

The story for the Ravens in Week 3 will continue to be their running game. With Ray Rice suspended indefinitely as he faces assault charges, Bernard Pierce and Justin Forsett have stepped up and made good on their big league opportunity, rushing for 113 yards on 28 carries and 126 yards on 19 carries through two games, respectively.

The Browns run defense has looked beatable thus far this season, allowing 5.4 yards per carry, 150.5 yards per game and three scores through two games. If Pierce and Forsett can find their holes in this game Flacco will have the time and options he needs to move the chains.

On the other side of the ball, Baltimore has looked formidable, and may be able to slow a Cleveland rushing attack that has picked their opponents apart thus far. Baltimore has allowed just 89 yards per game on the ground thus far, and no touchdowns.

The Ravens and Browns lean on their respective burgeoning rushing attacks en route to a game that burns through the clock before either can get many points on the board. Take the under, and create a betting account now in time to cash in on this tough AFC North matchup.