The Oklahoma State Cowboys keep on finding new ways to reach rock bottom this season. The Cowboys are coming off yet another low point when they extended their skid to four games – all in conference play – after losing to the Texas Longhorns, 28-7.  The going is about to get tougher for the Cowboys as they are about to face the seventh-ranked Baylor Bears this coming Saturday .

Meanwhile, the Wisconsin Badgers and the Iowa Hawkeyes are also set to meet on Saturday. You can read a preview of that game here.

Despite the Cowboys’ ugly loss to Texas, wherein they managed just 192 total yards, it’s tough to say that the worst is now behind Oklahoma State. Up ahead for the ‘Boys is a formidable challenge in the form of the Baylor Bears, who pose all kinds of threats to the beleaguered program.

[sc:NCAA240banner ]Defensively, the Cowboys must put nonstop pressure on Bryce Petty. The Bears are ranked fourth in the nation with 354.2 yards per game with Petty throwing an average of 302.6 yards. Getting to Petty is easier said than done but don’t tell that to Oklahoma State’s pair of excellent pass rushers in Emmanuel Ogbah and Josh Furman. Ogbah, in particular, has surpassed expectations by compiling nine sacks thus far this season, second most in the conference. Furman, meanwhile, is tied for sixth in Big 12 with five sacks. Keeping Petty and the rest of the Bears’ offense off the field is a better option, though.

The Cowboys’ offense has shown flashes of brilliance, especially during the few times their offensive line showed up to play. Quarterback Daxx Garman leads the team with 235.4 passing yards and 11 touchdowns, but he could have done more if only his protection unit is better than what it is now. Garman is lucky to still be alive at this point of the season, having been sacked 24 times – the most in the Big 12.

The Cowboys are 7-1 ATS in their last eight meetings with Baylor.

Betting on the Baylor Bears 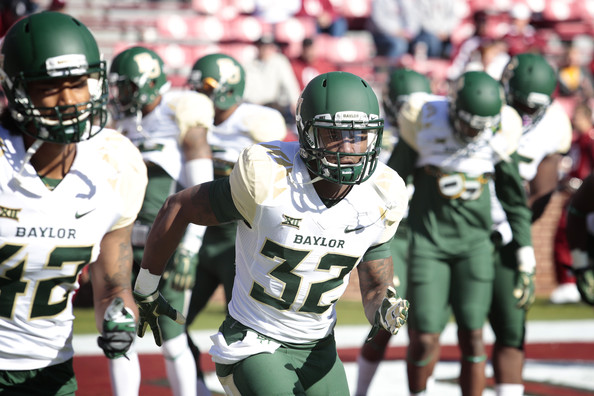 Following their loss to the West Virginia Mountaineers last October 19, it would have been easier for the Bears to feel disheartened after seeing their team being snubbed for a top four placement in the College Football Playoff rankings. Instead, Baylor dug deep and returned to their old business of blowing teams out of the water as evidenced by its back-to-back wins against the Kansas Jayhawks and the Oklahoma Sooners, respectively.

Bryce Petty was as scary as advertised, throwing for 387 yards and a touchdown to power Baylor to a merciless 48-14 beatdown of the then No. 15 Sooners in Norman last November 22nd. Shock Linwood, meanwhile, took care of the Bears’ ground attack as he rushed for 87 yards and two scores.

Aside from strengthening the Bears’ chance for a Big 12 title and a seat in the CFP, Baylor’s win over the Sooners may have also served us a notice of a looming massacre at Stillwater.

Petty is possibly in line for another huge game against the Cowboys as Oklahoma State, like the Sooners, has a poor defense against the pass. The Cowboys are the worst in the conference with 282.7 passing yards allowed per game. Another guy who’ll likely be money next Saturday is Bears wideout Corey Coleman. Coleman is the team’s top receiver, averaging 132.7 yards per game for a current total of 796 yards. He is coming off a ridiculous 224-yard performance against the Sooners and he’s undoubtedly going to be a tough cover for the Sooners’ problematic secondary.

The Bears are 4-1 ATS in their last five games as the road team.