Best Games to Bet on Today: Blazers vs. Cavs & Thunder vs. Nuggets

The road-loving Trailblazers will test the home-court mettle of the Cavs, while the Nuggets hope some cold mountain air can cool off the Thunder.

The Portland Trailblazers currently have the best record in the West, due in no small part to the play of reigning Rookie of the Year Damian Lillard. No sophomore slump is in sight for the dynamic lead guard, who’s averaging 20 points/game while orchestrating the league’s most potent offense (107.9 points/game). Portland is 11-1 SU in its last 12 road games. [sc:NBA240banner ]

His ROY predecessor, Kyrie Irving, however, is not having the season most had anticipated. The third year guard has seen his points and shooting percentages all drop from last year as the 9-14 Cavs have struggled to get above .500 this season. But they are still a respectable 7-3 SU at home, and are 7-2 SU in their last 9 home games vs the Blazers. 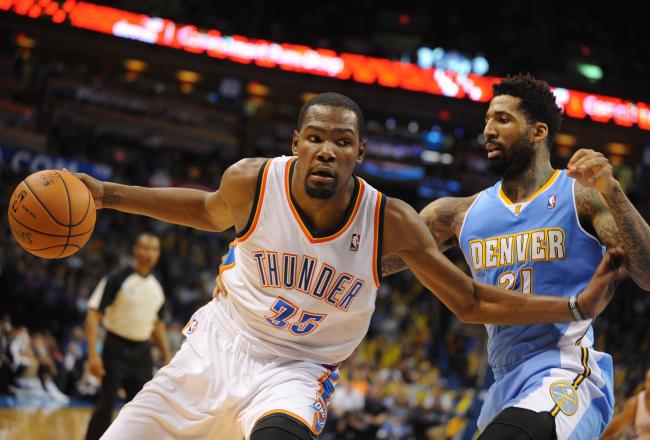 There’s no hotter team in the NBA at the moment than the Oklahoma City Thunder. Kevin Durant and friends have won six games in a row and are 9-1 SU in their last 10 games overall. Aside from being an unstoppable offensive force, Durant is also stepping up his defense; he’s totalled at least 3 stocks (steals + blocks) in eight of his last nine games.

Durant’s defensive assignment tonight against the Nuggets will be Wilson Chandler. The 6-year vet is second on the team in scoring (11.5 points/game), but he has gone over 17 points in each of Denver’s last three games. Chandler is also averaging a superior 13 points/game at home, where the Nuggets are 7-3 SU this season.