After failing to become the first team to put a blemish on the Cincinnati Bengals’ record, the Buffalo Bills travel to England for a London showdown with the Jacksonville Jaguars. The Jaguars, who have lost all of their last four games, are looking to end their slump in front of a massive crowd at Wembley Stadium. Will the Bills be able to bounce back? Or will the Jaguars spare themselves of another embarrassment?

For more Week 7 game previews, you can also read our breakdown of Browns vs. Rams and Ravens vs. Cards.

Betting on the Buffalo Bills (3-3)

[sc:NFL240banner ]The Bills’ search for their first win streak continues, as Rex Ryan and his men became Cincy’s latest victim. Following its 34-21 loss to the Bengals on Sunday, Buffalo will take a plane to London, where the Bills look to remain undefeated on the road. Dating back to last season, the Bills are 3-0 SU and ATS in their last three games away from Ralph Wilson Stadium.

The Bills were playing with backup quarterback EJ Manuel against Cincinnati, as Tyrod Taylor missed the game due to hurting knee. Manuel passed for 263 yards and a touchdown with an interception on 28 of 42 attempts. There’s no word yet whether Taylor would be healthy enough to play next week, so Manuel should be ready to answer the call in London.

Sammy Watkins, meanwhile, is in jeopardy of missing the London tilt after hurting his ankle against Cincinnati. If Watkins can’t go, his absence would be another hit to the Bills’ injury-riddled receiving corps that is also nursing injuries to Percy Harvin and Marquise Goodwin.

In any case, the Bills will have to utilize its backfield that is relishing the return of LeSean McCoy from sickbay. McCoy rushed for 90 yards and a touchdown on 17 carries against Cincinnati. Backup running back Karlos Williams didn’t play in Week 6, but another week of rest could be enough time for him to recover from a concussion that has caused him to miss two games in a row. The Bills are a run-heavy team that averages 125.3 rushing yards per game.

Betting on the Jacksonville Jaguars (1-5) 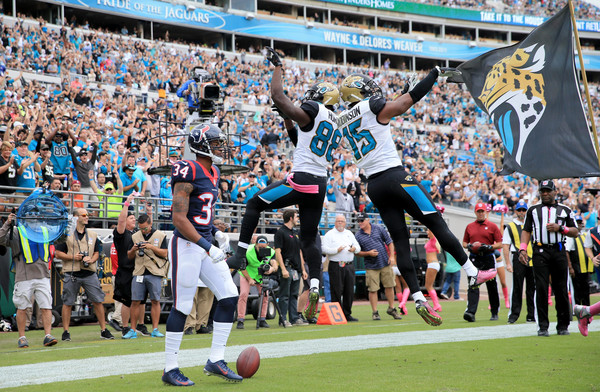 The losing continues for the Jaguars on Sunday, as Jacksonville fell to Houston, 31-20. Hopefully for the Jags, a game across the pond would put a stop to their free-fall.

That’s easier said than done for Jacksonville of course, especially if the Jags can’t fix the holes that appeared on their defense against Houston. In that game, the Jags made Brian Hoyer look like a Pro Bowler, as they allowed the Texans quarterback pass for 293 yards and three touchdowns with no picks.

The same lax defense can’t show up next week even against a Buffalo team that is 29th in the league in passing yards per game (209.5). That said, the Jaguars might be able to focus more on defending against the rush given the injuries on the Bills’ passing unit. The Jags, which held Arian Foster and company to only 95 rushing yards on Sunday, is allowing 101.7 yards per game, 14th in the league overall.

On offense, the Jaguars will continue to rely on Blake Bortles’ arm, which passed for 331 yards and three touchdowns in the Texans game.

While Bortles also threw three picks, the second-year quarterback has averaged 289 yards and 2.4 touchdowns in the last five contests. Bortles is enjoying a more talented cast of targets than the one he had in his rookie season, so it’ll be worth watching how he would fare against Buffalo’s defense that was burned by Andy Dalton last Sunday for 243 passing yards and three touchdowns.

Among Bortles top targets are Allen Hurns and Allen Robinson, who have combined for 862 receiving yards and eight caught touchdowns. Robinson, however, injured his leg in the fourth quarter of Sunday’s game, putting his availability next week up in the air.

All these weapons, however, could be put to waste if the Jags fail to secure Bortles in the pocket. The Jags offensive line has allowed 17 sacks on the season, including three by Houston.