Marcus Mariota and the rest of the Tennessee Titans (1-2) will be hoping that a week of rest will help put an end to their two-game losing skid. The Titans will lock horns with the visiting Buffalo Bills (2-2), who are also looking to rebound from a tough 24-10 loss to the Giants in Week 4, this coming Sunday at Nissan Stadium. Who will emerge victorious and get back on track first?

Read on below for an in-depth look at this exciting showdown. And while you’re at it, check out our other Week 5 game previews: Bears vs. Chiefs, Colts vs. Texans and Steelers vs. Chargers. Enjoy.

Following an impressive 41-14 triumph over the Dolphins in Week 3, the Buffalo Bills were immediately sent back down to earth by the New York Giants, who defeated them in front of their home crowd, 24-10, on Sunday night. This game marked the Bills’ second-straight loss at Ralph Wilson Stadium.

[sc:NFL240banner ]The Bills had no one to blame except for themselves in this one, as they shot themselves on the foot because of their evident lack in discipline and poor play selections. Their offense managed to compile just 77 yards and two first downs on its first nine possessions, while also finishing the game with 17 penalties for 135 yards, the second-most penalties in franchise history.

It’s worth taking into account, though, that the Bills made it a little bit interesting in the final quarter, as their rookie running back, Karlos Williams, caught a pass for 23-yards from Tyrod Taylor to finally give them their first touchdown of the match and made the scoreboard 16-10 with 9:21 remaining in the clock. But unfortunately, their defense couldn’t provide the necessary stop in the succeeding play and allowed the Giants’ Rashad Jennings to break free for a 51-yard touchdown run to put the nail in the coffin.

Now moving towards the upcoming week, the Bills will once again try to put themselves back in the win column when they travel to Nashville and square off with Marcus Mariota and the rest of the Tennessee Titans at Nissan Stadium.

For them to be able to bounce back, Taylor, who completed 28-of-42 passes for 274 yards with an interception and a touchdown, needs to be better in executing their plays and making the right decisions in their offense, especially with running back LeSean McCoy (hamstring) and wide receiver Sammy Watkins (calf), both nursing respective injuries. Their status remains unclear for Week 5.

If that remains to be the case, the responsibility is also on Williams and tight end Charles Clay in trying to fill in thise huge voids.

Williams, in his first NFL start, finished just with 40 yards on 18 carries versus the Giants but still holds a team-best 7.8 yards per carry this campaign. Clay, meanwhile, was the lone bright spot on Sunday as he was able to compile 111 yards on nine receptions despite the loss. He’ll definitely strive to build on that performance opposite the Titans this coming Sunday. 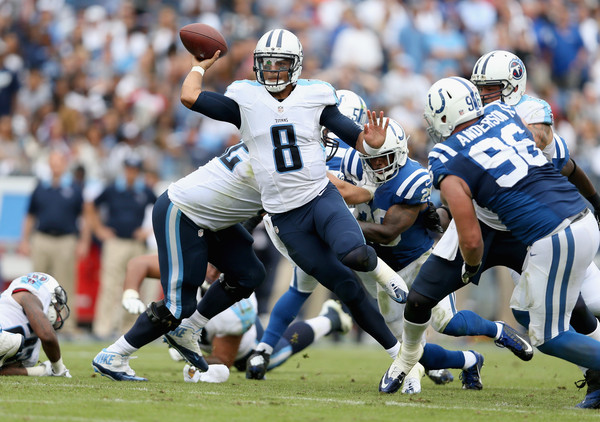 The losing woes continued for the Tennessee Titans as they were handed their second-consecutive defeat in Week 3 opposite the Colts, who managed escape with the narrow 35-33 victory.

This setback was definitely a tough one to swallow for the Titans. They failed to protect a 13-point advantage as they were simply overwhelmed by the heroic of quarterback Andrew Luck down the stretch. Luck , who improved to 7-0 against their division rivals, threw a pair of crucial touchdown passes—a 35-yarder to Phillip Dorsett and an 11-yarder to Donte Moncrief—in the latter part of the fourth quarter to ultimately complete the comeback.

Despite the loss, Marcus Mariota had a steller performance once again. Mariota, the 2014 Heisman Trophy winner, finished the game with a franchise-record of 367 yards with two TDs but had a pair of costly interceptions that spelled doom for the Titans. He’ll be looking to redeem himself from those mistakes when he gets another shot at his first career win at Nissan Stadium versus the visiting Buffalo Bills this coming Sunday.

In order for the Titans to avoid a third-straight loss, they’ll need to take advantage of the Bills’ shaky secondary that surrenders 6.3 yards per catch thus far through three contests, which is the fourth-most in the league.

Expect none other than the pair of WR Kendall Wright and TE Delanie Walker, to have a promising performance .Wright successfully bounced back from his poor effort during Week 2 at Cleveland, as he hauled in seven of his team-leading 12 targets for 95 yards and a touchdown against the Colts. Walker, on the other hand, was pretty solid as well in his return from a wrist injury with 68 yards on seven receptions under his belt.

The Titans (+2.5) get back on track with a thrilling 35-28 triumph thanks to another tremendous performance from Mariota.