The free-falling Carolina Hurricanes  (0-3-0) look to notch their first win of the season later tonight, when they kick off a off a seven-game road trip at Joe Louis Arena against the Detroit Red Wings. Detroit has been the complete opposite of the Cane so far, as the Red Wings currently sport an unblemished 3-0-0 record in the early stage of the season.

For more NHL, you can also read our preview of Maple Leafs vs. Blue Jackets.

Betting on the Carolina Hurricanes

[sc:NHL240 ]The Canes just keep on adding donuts to their record. Still winless after three games, Carolina begins an agonizingly lengthy road trip later tonight in Motown, where the Hurricanes are just 1-5 in their last six games there.

In their most recent outing, the Hurricanes suffered a 4-1 setback on Tuesday at the hands of Florida, which scored three goals in the third period to run away with the victory. It was a very frustrating loss for the Hurricanes, as their offense fell flat anew. Carolina averages just 1.7 goals per game and is only 1-for-13 on the man advantage. Such offense won’t work against Detroit’s defense that lets just 1.3 goals a contest—sixth best in the NHL.

That said, Carolina played well against Detroit last Saturday, albeit in a 4-3 loss at home. In that game, Carolina massively outshot the Red Wings, 47-19. Of course, being on the power play seven times as against Detroit’s sole 5-on-4 chance played a big part in the Hurricanes’ aggressive play that night.

Carolina’s top scorer last season, Eric Staal, has yet to find the back of the net this season. Same goes with Jeff Skinner, who is still searching for his first point following an 18-goal season.

There is hope, however, for Carolina’s defense even though the team is allowing 3.3 goals per game. Carolina’s opponents are mustering just 24.7 shots per game, which is the second fewest in the league.

Unfortunately for the Hurricanes, Eddie Lack and Cam Ward have been allowing goals at a high rate. Lack allowed three goals on 29 shots faced in the Florida game—his only start this season—while Ward surrendered six goals on 44 shots in two starts for a poor .864 SV%. 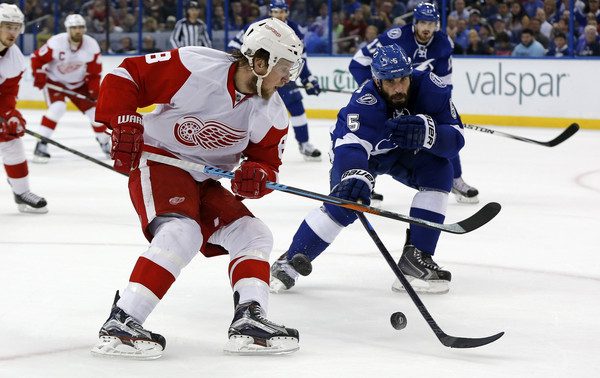 With the way the Red Wings are playing, it’s as though Mike Babcock never left Detroit. Now under Jeff Blashill, the Red Wings were able to stitch together three-straight wins to start the season. That stretch includes Detroit’s 3-1 humbling of last season’s Stanley Cup finalist Tampa Bay on Tuesday.

Key to Detroit’s early success is the first line of Justin Abdelkader, Henrik Zetterberg, and Dylan Larkin, which leads the Red Wings’ offense that churns out 3.7 goals per game.

The same line starred for Detroit in its win over the Bolts, as Zetterberg scored a goal and had an assist, while Larkin chipped in an assists. Abdelkader didn’t score, but made key plays to help Detroit score two of its three goals. Despite going scoreless against Tampa Bay, Abdelkader remains as the team’s top scorer this season with four.

In addition, Abdelkader scored twice in Detroit’s earlier win against Carolina, so he’ll be a player to watch tonight in the rematch.

The real hero of that game, however, was goalie Petr Mrazek, who turned away 44 of the Hurricanes’ 47 shots. It’s not sure whether Mrazek or Jimmy Howard (2-0, 0.50 GAA, .977 SV%) will be between the pipes later tonight, but regardless of who gets the start, the Red Wings’ defensemen must be able to limit Carolina’s shots.