The Green Bay Packers extended their winning streak to three games with a pulsating come-from-behind win over the Miami Dolphins on Sunday. They can make it four wins in a row this coming weekend when they face the Carolina Panthers who were left frustrated by the Cincinnati Bengals in a high-scoring 37-37 tie.

Read on for a complete preview of this NFC showdown and while you’re at it, you can check out our preview of the Thursday Night Football game between the New England Patriots and the New York Jets here.

Carolina may have ended their game against Cincinnati with a disappointing 37-37 tie but things are looking up for the Panthers as their starting quarterback looks to be back to his dazzling best.

[sc:NFL240banner ]Quarterback Cam Newton was spectacular on Sunday completing 29 of 46 passes for 284 yards and two touchdowns. What’s encouraging for Carolina fans, however, was how he revelled in the ground game. Newton rushed for 107 yards and a touchdown on 17 carries against the Bengals after running for only 14 times for 42 yards in his previous five games this season.

With Newton back to being a dual threat, it opens a new dimension for the Carolina offense which has struggled so far this season. They are just 20th in the league in total offense with the Panthers averaging just 343.8 total yards this year.

In the game against the Bengals, however, the Panthers exploded for 431 yards in total offense. It was a game that went back and forth and it could have easily been a Cincinnati victory if not for kicker Mike Nugent slicing his 36-yard field goal try wide right.

The Panthers will look to continue that upward trend with their offense when they face the Packers this coming weekend. Carolina have every reason to be confident of doing just that with the Packers just 20th in the league in terms of total defense with opponents averaging 368.0 yards against them.

One thing that they must address, though, is their own defense as they are eighth-worst in the NFL in total yards allowed with opponents registering 392.5 yards a game against them this year. Against Cincinnati, they allowed a whopping 513 total yards with Bengals QB Andy Dalton completing 33 of 43 passes for 323 yards and two touchdowns.

It is the third time in the last four games that they have allowed 37 or more points. It won’t get any easier for them this coming Sunday as they’ll face another elite quarterback in Aaron Rodgers. The Packers quarterback is 10th in the league in passing with an average of 236.5 yards per game this season.

The Panthers are 4-2 ATS this season. 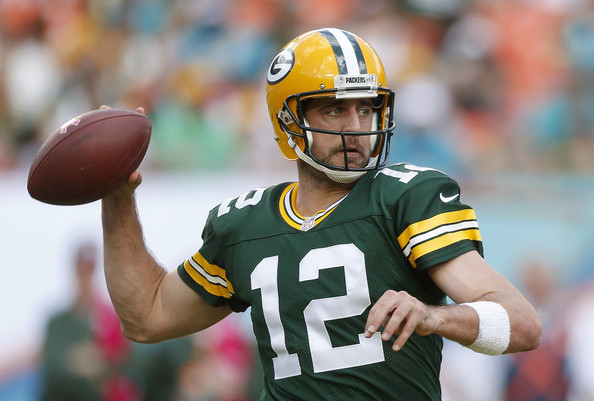 The Green Bay Packers had to leave it late on Sunday before escaping with a 27-24 come-from-behind win over the Miami Dolphins to extend their winning streak to three games.

Quarterback Aaron Rodgers completed three touchdown passes, none bigger than the one he threw to tight end Andrew Quarless with three seconds remaining to seal the comeback victory. Green Bay trailed 24-17 with nine minutes to go but Rodgers had the final say, directing consecutive drives of 68 and 60 yards to complete the 10-point turnaround.

Rodgers completed 24 of 42 passes for 264 yards with no picks. For the year, Rodgers has already completed 15 TD passes and has thrown just one interception. As a result, he is third among starting QBs this season in the passer rating department with a 111.4 mark.

He will fancy his chances this coming weekend when he faces the Carolina Panthers who are just 19th in passing defense this season with opponents averaging 252.3 yards against them. Rodgers will be licking his chops at the prospect of hitting the Panthers secondary that allowed 320 passing yards in a 37-37 tie with the Bengals on Sunday.

A concern however for the Packers is their own secondary which was ravaged by injuries in the game against the Dolphins. Starting cornerbacks Sam Shields and Tramon Williams had to leave the game in the third quarter because of knee and ankle injuries respectively and will be closely monitored ahead of their match with Carolina.

The duo has been integral to a Packers defense that is seventh-best in the NFL in terms of passing defense with opponents averaging just 213.5 passing yards against them.

The Packers (-7) trounce the Panthers to extend their win streak to four.