The Chicago Bears and the Atlanta Falcons were left to rue missed opportunities last Sunday as they both squandered second-half leads in their respective Week 5 matches. They can erase that bitter taste of defeat when they square off this coming Sunday in a battle between teams with similar 2-3 records.

Read on for a complete analysis of this vital NFL showdown.  You can also check out our preview of the clash between the Cowboys and the Seahawks here.

The Chicago Bears can only blame themselves after a second half collapse against the Carolina Panthers saw them crashing to their second consecutive defeat.

[sc:NFL240banner ]The Bears had a 21-7 edge in the second quarter and could have stretched it even further with a 35-yard field goal try by kicker Robbie Gould. He missed way right however and that triggered the rally which saw Carolina outscore Chicago 24-3 the rest of the way.

Those two turnovers came in a critical one-minute and 39 second span in the fourth quarter with the Bears still up 24-21. As a result, the Panthers took full advantage, scoring 10 points off them to seal Chicago’s fate.

They will need to address those errors ahead of their meeting with the Falcons this coming Sunday. Turnovers have been the main reason behind the Bears’ defeats this season, giving away eight in their three defeats so far this year for a -4 turnover margin.

Apart from that, the Bears will also have to contend with the Falcons’ high-flying offense. Atlanta have the third-best offense in the league this season averaging 434.6 total yards per game in their first five assignments. Also, the Falcons have averaged 47.5 points in their two games at Georgia Dome so far this season.

The good news for the Bears, however, is that the Falcons are struggling mightily on the defensive end this year. They are the fourth-worst team in the NFL in terms of total defense with opponents averaging 407.2 yards  per game.

That will definitely help the Bears who are only 17th in the league in total offense with an average of just 348.6 yards per game this season. The onus is on quarterback Jay Cutler to rediscover the form that saw him lead the Bears to back-to-back road victories earlier this campaign.

It was a mixed bag for Cutler in the game against the Panthers as he completed 28 of 36 passes for 289 yards and two touchdowns but also threw two costly interceptions.

The Bears are 3-2 ATS in their last five meetings with the Falcons at the Georgia Dome. 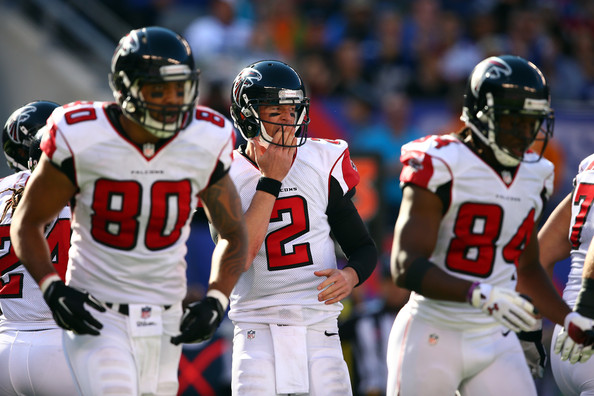 Atlanta’s road woes continued last Sunday as the Falcons were trounced by the New York Giants 30-20, to crash to their third road defeat of the season.

It was the same story once again for the Falcons as they were unable to protect a second half lead on the road for the second straight game. Last week, they were up 28-27 against the Vikings in the third quarter before eventually losing 41-28. This time around, they were up 20-10 against the Giants with five minutes remaining in the third quarter before New York scored 20 unanswered points to grab the comeback victory.

Fortunately for the Falcons, they will return back home to the Georgia Dome this coming Sunday where they will face the Chicago Bears in Week 6 action. The Falcons have a perfect 2-0 record at home this season, including their 56-14 hammering of the Tampa Bay Buccaneers their last appearance there.

They have outscored their opponents 93-48 at home, a far cry from their road mark where opposing teams have outscored them, 95-58. With Matt Ryan as their starting quarterback, the Falcons have amassed an impressive 38-10 record at the Georgia Dome.

Ryan completed 29 of 45 passes for 316 yards, a touchdown and one interception as he helped the Falcons outgain the Giants 397-317 (yards). Atlanta’s advantage in total offense was wasted however as they were unable to convert on third downs. They were just 2 of 13 in third downs against the Giants. They will need to improve on that mark if they are to beat the Bears this coming weekend.

One highlight for the Falcons was the stellar play of their makeshift offensive line. With center Joe Hawley, right tackle Lamar Holmes and left guard Justin Holmes out because of injuries, many expected the worst for Atlanta. But their replacements proved to be capable back-ups as center Peter Konz, right tackle Gabe Barimi and left guard Harland Gunn helped the Falcons to post a 4.3 yard per rushing attempt average.

Also, QB Ryan was sacked only once meaning he was able to orchestrate the offense more effectively last time out. That will be crucial when he faces the Bears this coming Sunday in a game that is widely expected to be an offensive shootout.

The total has gone over in Atlanta’s last two home games. The Falcons are 2-3 ATS this season.

The Falcons (-3) edge past the Bears to preserve their unbeaten home record.