The Baltimore Ravens fell well short of defending their AFC North championship last season and the Cincinnati Bengals took advantage, grabbing the division out from under the defending Super Bowl champions. The Ravens are on a mission to reclaim their crown this season, and it begins when they host the Bengals on the first Sunday of the 2014-2015 NFL season.

A lot will be expected of the two starting quarterbacks, Andy Dalton and Joe Flacco, who are being paid franchise star-caliber money. Will either begin to repay their team’s hefty investment?

Football is here. Get into the action with the preview below, our preview of the Week 1 Saints vs. Falcons game, or our compilation of experts’ picks for the 2014-2015 season.

All eyes will be on Andy Dalton as he makes his first start since signing his big-money contract in the summer. Dalton led the Bengals to an 11-5 SU (10-5-1 ATS) record last year, their best season since 2005 but once again fell short in the postseason. He’ll have a largely unchanged offense, one which ranked sixth in scoring at 26.7 points/game last season, and headlined by All-Pro wide receiver AJ Green.

[sc:NFL240banner ]Green smoked the Ravens’ secondary for eight catches, 151 yards and a touchdown last season in Baltimore. Dalton had a much rougher time of it as he was sacked five times and picked off three times in a 20-17 overtime loss.

The Bengals’ defense, however, didn’t play as poorly. A top five defense last season in terms of points and total yards allowed, they picked off Baltimore QB Joe Flacco twice and sacked him five times. Unless Baltimore’s poor ground game makes a dramatic improvement, the Bengals D will be keying in on Flacco and his receivers all game long.

Cincinnatti’s defense lost its coordinator, Mike Zimmer, who took up the head coaching position in Minnesota, but it’ll have star tackle Geno Atkins and cornerback Leon Hall back in the lineup after they both suffered season-ending ACL injuries last year. Those two should make their presence felt against the Ravens’ passing game.

Despite the Bengals’ very good 11-5 record last season, all five of their losses came on the road, and to non-playoff teams. They were just 3-5 SU/2-5-1 ATS away from home. 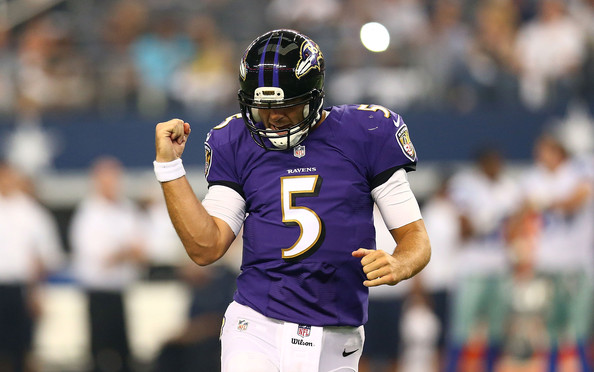 Joe Flacco hardly lived up to the mammoth contract he received last season, as he proceeded to set new career lows in yards per attempt (6.37) and QB rating (73.1) and a new career high in interceptions (22). It certainly didn’t help Flacco that his receivers outside of Torrey Smith weren’t exactly the most stellar group.

He’ll have a couple more weapons to work with this season after they signed veteran receiver Steve Smith in the offseason. Smith caught six balls for 80 yards and a touchdown in Week 3 of preseason against the Redskins. Flacco will also have Dennis Pitta back after the tight end missed most of last season due to injury. Pitta featured against the Bengals in the final regular season game last season and had a team-leading eight receptions and 63 yards.

But the area where the Ravens truly struggled last season was in the running game, where they ranked 30th in the NFL. Unless Bernard Pierce fails to recover from a mild concussion he suffered in their preseason game against the Redskins, he’ll start in place of Ray Rice, who’s suspended for the first two games of the season. Pierce will have to improve mightily on his subpar 2.9 yards/carry last sesaon to provide Flacco with even the threat of a running game against the Bengals.

The Ravens were a respectable 6-2 SU (4-4 ATS) at home last season, but they’re 3-0 against Dalton’s Bengals at M&T Bank Stadium.

Flacco uses his new receivers to outgun Dalton in Baltimore on the way to a hard-fought Week 1 win. Take the Ravens -2.5 at home over the Bengals. Create a betting account and cash in on the NFL’s fierce division rivalries all season long.