The Cincinnati Bengals and the San Francisco 49ers – both losers on Sunday – likely wish that Week 14 never happened. The 49ers got humiliated by the equally pathetic Browns in Cleveland, but that game pales in comparison to Cincinnati’s defeat, as the team may be headed into the postseason without Andy Dalton running its offense.

Next Sunday, the two clubs will look to bounce back from terrible losses. And with San Francisco having nothing else to lose this season, the team could very well create a bigger problem for Cincy with a monumental upset. But can the Bengals still prevail even without Dalton at the helm? Let’s take a look at this crucial matchup below.

Afterwards, check out more of the NFC-versus-AFC matchups on tap with our previews for Jets vs. Cowboys and Falcons vs. Jaguars to keep your finger on the pulse of Week 15’s vital contests.

Betting on the Cincinnati Bengals (10-3)

[sc:NFL240banner ]In one back-breaking play on Sunday, the Cincinnati Bengals’ once very bright 2015 season may be in for a complete meltdown.

Not only did Andy Dalton throw a crucial pick in the first quarter, he also broke his right thumb while attempting to make a tackle after the ensuing interception during the 33-20 loss to the Pittsburgh Steelers. Even worse, the Bengals failed to secure the AFC North crown with a win, and also gave the Steelers a second wind at not only making the playoffs, but also a shot at the division crown.

Dalton only missed half of a game during his five-year NFL career before the crippling injury, and entered Sunday’s contest with the best QB rating in the league. In his place, former ‘Bama standout A.J. McCarron showed some promise and poor mistakes alike, turning Cincinnati’s offense into quite an enigma entering Week 15. The second-year pro connected on 22 of his 32 passes for 280 yards and a pair of TDs on Sunday, but also threw two interceptions that both led to Pittsburgh touchdowns (with one being a nasty pick-six).

The Bengals also had a rough afternoon defensively by surrendering 33 points to the Steelers. Before that game, their D only gave up more than 10 points in two of their last seven contests. At least free safety Reggie Nelson is still playing at a high level. Nelson had another interception on Sunday, giving him at least one pick over the last five games.

And luckily for Cincinnati, they’ll attempt to get their now perilous season back on track against the Pacific-based 49ers. The Bengals have won six of their last seven games against NFC West opponents, going 4-0-2 against the spread during that span.

Create a betting account now to get in on all the Week 15 action from the NFL. 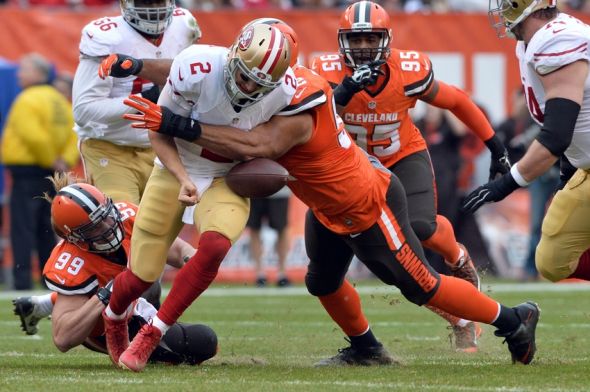 Just when the San Francisco 49ers seemed to have boosted their spirits up with the OT win against the Bears last week, they followed-up that performance with an embarrassing stinker of a loss to the lowly Cleveland Browns on Sunday, 24-10. With the loss, the Browns end their seven-game skid, and also eliminated the Niners from playoff contention in the process.

On paper, Blaine Gabbert’s day in the air (18-of-28 passing with 194 yards, a touchdown and no picks) seems like a passable one for the resurgent QB. Then again, when you consider that 94 of San Francisco’s offensive yards came in the final drive of garbage time, Gabbert’s safe and fairly efficient effort was all just a mirage.

The Niners really just mustered up 127 yards of offense prior to their final possession of the contest, with not one receiver reaching the 50-yard receiving barrier the entire game.

Their defense and offensive line also made matters even worse. The San Fran D allowed Cleveland to erupt for 230 rushing yards on 41 carries, while the O-line gave up nine massive sacks and eight tackles for loss.

If there’s a silver lining to this defeat, though, is that at least the Niners showed that they are still rather capable of creating some turnovers. They caused two of them on Sunday – an INT and a fumble recovery – and this should aid in rattling McCarron, Cincy’s young and unproven play-caller, in Week 15. Prior to Sunday’s loss, San Francisco was the second-worst team in takeaways with just nine of them for the season.

With the boys from the Bay Area struggling on both sides of the ball and the Bengals having to operate with an inexperienced QB, expect next Sunday’s bout to be a sloppy one. With that in mind, it’s also worth noting that the Niners are 4-3 SU/ATS over their last seven home games, with six of the seven contests going under the total.

McCarron shows some flashes of magic in his second-career NFL start to lead Cincinnati (-4.5) to a solid 30-16 victory.