The Baltimore Ravens took a badly needed win, 23-20, on the road against divisional rivals Pittsburgh Steelers. They return home in another pivotal AFC North matchup against Cleveland. The Browns continue on the road after a solid outing against San Diego, but a late Chargers field goal had them on the losing end of a 30-27 game.

Catch some of the hottest games in Week 5 with our complete previews for the Bills vs. Titans and Broncos vs. Raiders.

Offense was clicking for the Cleveland Browns. Josh McCown went 32 of 41 for 356 yards and two touchdowns with no picks; Isaiah Crowell ran for 63 yards on 12 carries; and Duke Johnson led the team with nine catches for 85 yards and a score. But the Browns still lost a close game on the road to the San Diego Chargers.

[sc:NFL240banner ]McCown and his receivers should have a good day through the air against a mediocre Ravens pass defense. Baltimore has allowed 242.2 yards passing per game, good for only 17th in the league. After last week’s performance, Johnson seems to be a solid catching running back to give McCown an extra option when passing. But Travis Benjamin should remain the Browns’ primary target, leading the team with 328 yards passing and four scores.

The Browns may also be able to contain the Ravens’ passing attack missing its No. 1 receiver. Baltimore wide receiver Steve Smith Sr. is out of Sunday’s game due to micro fractures in his back. The absence of Smith should be a big boost for the Browns’ pass defense, which allows 264.8 yards per game. The Browns have allowed the fourth-most passing touchdowns in the league (nine).

Cleveland does have a solid pass rush which could help further limit the Ravens’ passing game. The Browns have nine sacks this season (eighth in the league) led by linebacker Armonty Bryant’s 2.5 sacks. But getting past the Ravens’ offensive line may be tough as Baltimore has excellent pass protection. Ravens quarterback Joe Flacco has been sacked just seven times this season, 12th-least in the league.

The Browns are 4-1 ATS in their last five games at Baltimore. 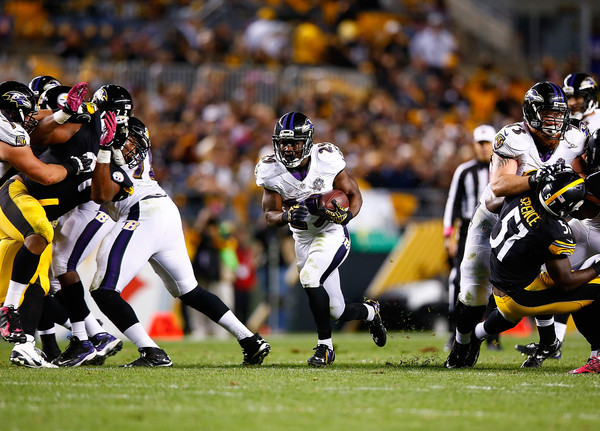 Quarterback Joe Flacco had a horrible game against the Pittsburgh Steelers in Week 4. He threw for just 189 yards with a touchdown and an interception; Flacco was also sacked five times. Luckily for the Ravens, the running game was stellar as Justin Forsett ran for 150 yards on 27 carries after totaling just 124 through the first three games.

Forsett and the Ravens’ rushing offense should be in high gear in this matchup. They face one of the worst rushing defenses in the league in the Browns. Cleveland has allowed opponents to rush for 141.5 yards rushing per game this season, second-most in the league.

Baltimore’s kicking also sparkled as the big-legged Justin Tucker made 3 of 3 field goals, including the game-winning 52-yarder in overtime. Considering that the Ravens will miss their No. 1 wide receiver due to a back injury for this game, having Tucker making field goals is crucial to put points on the boards.

Don’t count out the Ravens’ passing attack though. Flacco still has a deep threat receiver in Kamar Aiken who caught five passes for 77 yards and a score against the Steelers. The Browns have been burnt by thedeep ball this season, ranking 30th in the league with 14 yards allowed per reception.

The Ravens’ pass rush (sixth-best in the league with 11 sacks) could excel in this game. Sacks leaders Elvis Dumervil and Za’Darius Smith (each have two) should be able to break the pocket against a leaky Cleveland offensive line. The Browns have allowed the second-most sacks in the league (14).

Baltimore has won seven straight at home against the Browns, but are just 4-3 ATS in those games.

The Ravens trample past the Browns. Baltimore gets its second win of the season while covering the spread. Create a betting account now and get all the best odds and lines for exciting football action.