There’s just no stopping Peyton Manning and the rest of the Denver Broncos. Denver maintained its perfect record this season with a nerve-wracking victory over Minnesota on Sunday. The Broncos will look to extend their winning streak even further when they take on the Oakland Raiders in an intriguing AFC West clash this coming Sunday.

Who will grab the edge in this blockbuster showdown? Read on below for an in-depth breakdown of this divisional matchup and while you’re at it, you can check out our NFL Week 5 previews of Washington vs. Atlanta and Indianapolis vs. Houston.

The Denver Broncos stretched their unbeaten run to four games with a gritty 23-20 victory Sunday over the Minnesota Vikings. It was another huge victory for the Broncos who improved their season-record to a perfect 4-0 slate. That’s now the seventh time in Peyton Manning’s career that he has started the season 4-0.

[sc:NFL240banner ]Manning had a so-so outing on Sunday, completing just 17 of 27 passes for 213 yards and a touchdown with two interceptions. Fortunately for the five-time MVP, the Broncos’ much-maligned ground game finally came to life in this contest. After averaging just 57 yards rushing in their first three games, the Broncos erupted for 144 yards on the ground against the Vikings.

Ronnie Hillman wreaked havoc against the Minnesota defensive line, running for 103 yards on 11 carries for his third career 100-yard game. He raced around the left sideline on a classic stretch play for a 72-yard touchdown run in the first quarter that ignited Denver’s floundering offense. It was the longest touchdown run by a Broncos running back in 15 years.

The Broncos now set their sights on a possible 5-0 start when they take on the Oakland Raiders this coming Sunday. For the Broncos to achieve this feat, they need to continue their excellent play on the defensive end. Denver is first in the NFL in total defense, allowing just 275.5 yards per game this season. The Broncos flexed their defensive might against the Vikings, recording a whopping seven sacks against Minnesota. They even held 2012 MVP Adrian Peterson to just 81 yards on 16 carries on Sunday.

The Broncos will also take comfort in the fact that they have fared extremely well against the Raiders on the road of late. They are unbeaten in their last four meetings against the Raiders at O.co Coliseum, beating them by an average of 17.8 points.

The Broncos are 4-1 SU and ATS in their last five road games. 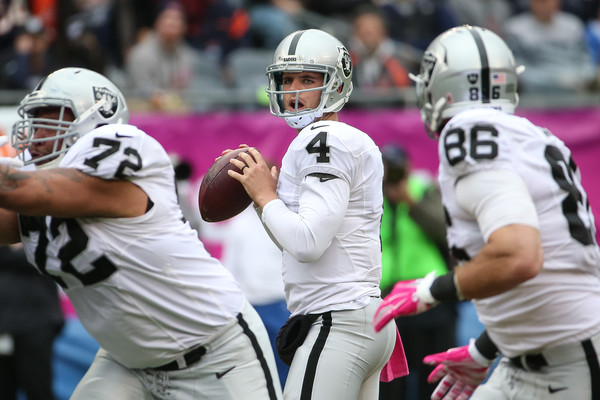 The Oakland Raiders had their two-game winning streak snapped on Sunday with a gut-wrenching 22-20 loss to the Chicago Bears. Robbie Gould scored a 49-yard field goal in the dying seconds to give Chicago its first victory of the season. It was a disheartening defeat for the Raiders who were favored to win for the first time in 27 games.

It’s back to the drawing board for the Raiders who were just a defensive stop away from starting the season 3-1. For Oakland to get its season back on track against Denver, it needs a quality performance from sophomore quarterback Derek Carr. He struggled against the Bears on Sunday, completing just 20 of 33 passes for 196 yards with two touchdowns and an interception. That’s a far cry from his 230.5 yard per game average this campaign.

Apart from Carr, the Raiders also need Amari Cooper and Latavius Murray to step up their game against the Broncos. Cooper, who leads all NFL rookies in catches and yards receiving, had just four receptions for 49 yards against Chicago on Sunday. Murray, on the other hand, only ran for 49 yards which is a complete disappointment considering he’s coming off a career-high 139-yard performance against Cleveland last week.

Oakland pulling off this offensive turnaround will be easier said than done, though, with Denver possessing one of the league’s best defenses this year. The Broncos are tops in the NFL in passing defense, allowing just 185.2 yards per game this season. Their rushing defense has been solid as well this season, surrendering just 90.2 yards per game on the ground this campaign, eighth-best in the NFL.

The Raiders are 4-1 SU and ATS in their last five home games.