Here come the Chiefs! Kansas City moved to within a game of the division-leading Denver Broncos in the AFC West with a resounding 20-point victory over Baltimore on Sunday. They will look to slice that deficit even further when they take on the Cleveland Browns in a mouth-watering showdown at Arrowhead Stadium.

Who will emerge victorious in this pivotal clash? Read on below for a preview of this NFL showdown and while you’re at it, you can check out our Week 16 previews of Green Bay vs. Arizona and San Diego vs. Oakland.

Betting on the Cleveland Browns (3-11)

Things are going from bad to worse for Cleveland as it crashed to a humiliating 30-13 loss to Seattle on Sunday. The Browns had no answer for Russell Wilson who became the first NFL quarterback to throw three or more touchdown passes and zero interceptions in five straight games. Meanwhile, the Browns have now lost eight of their last nine games.

[sc:NFL240banner ]The Browns will look to get their season back on track when they take on the Chiefs this coming Sunday. For the Browns to return to the win column, they will need to start addressing their failings on the offensive end. They scored just 13 points against the Seahawks on Sunday, posting a total of just 230 yards. The Browns have struggled mightily on the offensive end this year, averaging just 18.1 points per game this season, fourth-worst in the NFL.

That being said, the onus is on Johnny Manziel to pick up his play for the Browns. He completed just 19 of 32 passes for 161 yards in the game against Seattle with one touchdown and one interception. That kind of performance simply won’t do against a Kansas City defense that’s allowing just 18.4 points per game this season, third-lowest in the NFL.

The Browns are 2-5 ATS on the road this season.

Betting on the Kansas City Chiefs (9-5) 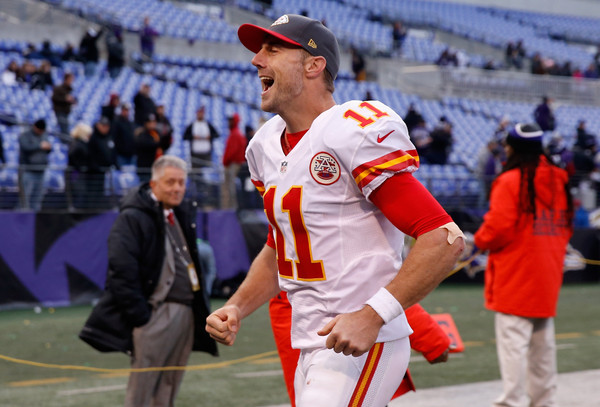 The Kansas City Chiefs will head to their showdown with Cleveland with momentum on their side after trouncing the Baltimore Ravens, 34-14, on Sunday. It was another impressive victory for the streaking Chiefs who have now won eight consecutive games. They became the first team in the history of the NFL to follow a five-game skid with eight successive wins in the same season.

Starring for Kansas City in this one-sided contest was quarterback Alex Smith. He completed 21 of 25 passes for 171 yards and a touchdown. Also impressing for the Chiefs in this all-important victory were Charcandrick West and Jeremy Maclin. West torched the Baltimore defensive line with 76 rushing yards and a score on 16 carries. Maclin, on the other hand, benefited from Smith’s stellar play, nabbing seven receptions for 50 yards and a touchdown.

They will look to sustain the momentum of that huge win when they take on the Browns this coming Sunday. For the Chiefs to stretch their unbeaten run, they will need to continue their excellent play on the defensive end. The Kansas City defense was exceptional on Sunday, converting three first-half Baltimore errors into 21 huge points.

The Chiefs’ offense, for that matter, has been adept at protecting the football of late. They didn’t commit any turnovers against the Ravens, which is the sixth time during the eight-game winning streak they haven’t handed a single miscue to their opponents. That will be critical in unlocking a Cleveland side that’s sixth-worst in the NFL in total defense, allowing 387.9 yards per game this season.

The Chiefs are 3-3 ATS at home this season.