The wait is almost over. Selection Sunday (Dec. 6) is just days away, and the world will finally know who’s in the 2016 College Football Playoff. With the conference championship games on tap this Saturday, though, the final playoff picture is still very much in flux. Nevertheless, let’s look ahead to Sunday and project the most likely matchups for all six New Year’s bowl games.

Speaking of Saturday, check out our previews of the big conference title games, namely the SEC’s Florida vs. Alabama, the ACC’s North Carolina vs. Clemson and the Big Ten’s Michigan State vs. Iowa.

[sc:NCAA240banner ]Iowa’s fate is still in its own hands. If it beats Michigan State in the Big Ten championship game and remains undefeated, it’s likely going to go to the College Football Playoff. The Hawkeyes are just 3.5-point underdogs in that game, but if they can’t overcome Sparty, they should still have a big bowl game waiting.

They’ll likely get matched up with the Florida State Seminoles, who are now 10-2 after blowing out Florida in the Swamp. The Noles will be a perfect fit for the Peach Bowl, which will be held in nearby Georgia. 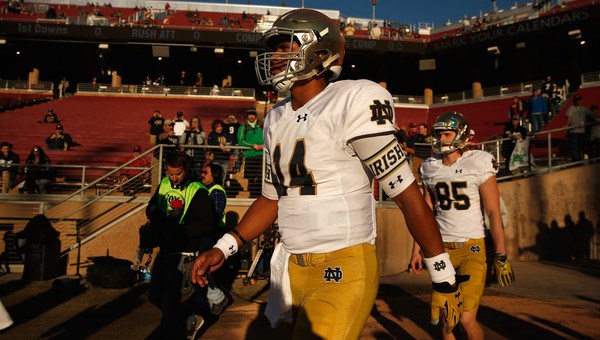 Notre Dame’s playoff dreams were well and truly dashed after their heart-breaking loss to Stanford. The 10-2 Irish will have to content themselves with one of the New Year’s Day bowls, most likely the Fiesta Bowl, in which they have already appeared four times.

Meanwhile, Houston is well on course for a big bowl bid of its own after beating Navy to set up an AAC title game with Temple. The Cougars will get the reserved New Year’s invite for the highest ranking Group of Five champion if they overcome the Owls, which they are favored by 6.5 points to do.

Ohio State pushed itself right back into New Year’s contention with a thorough dismantling of Michigan in The Game. The 11-1 Buckeyes still have an outside shot of breaking into the CFP if the stars align a certain way, but they could have a Rose Bowl bid ready and waiting should they fail to get in.

They’ll most likely get paired up with the Stanford Cardinal, who defeated a tough Notre Dame team and are favored by 4.5 points in the Pac-12 championship game over USC.

With the way things have gone, Ole Miss was actually a crazy 4th-and-25 play away from going to the SEC title game. That fact’s got to sting, but the Rebels should still be satisfied with likely getting the SEC’s Sugar Bowl bid, which they all but secured after a big win in the Egg Bowl.

Meanwhile, Baylor’s faint hopes of sneaking into the CFP were smashed to pieces in their sloppy loss at TCU. But unless the Bears somehow lose to a 4-7 Texas team in their regular season finale, they should still get the Big 12’s bid for the Sugar Bowl. 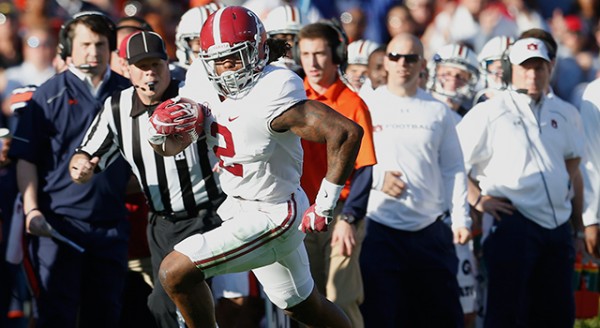 Alabama will be the biggest favorite among the four Power 5 championship games this Saturday, and is currently a 17-point favorite against Florida. Barring any incredible upset, a win over the Gators will seal the Tide’s trip to a national semifinal (most likely the Cotton Bowl), where they could meet Michigan State.

The Spartans once again have their fate in their own hands, and will set up a terrific matchup with the Tide if they get past the Hawkeyes in the Big Ten title game.

Despite being the No. 1 team in the country, Clemson has a tricky test going into enemy territory in the ACC title game against North Carolina. The Tigers are just 5-point favorites over the Tar Heels, but with Heisman candidate Deshaun Watson pulling the strings against a mediocre UNC defense, they should be able to avoid a Clemson-ing and advance to the Orange Bowl in sunny Florida.

Oklahoma, the Big 12’s one true champion, won’t have any more opportunities to better its resume. It should still get into the final four as things stand, but will likely get bumped down to the last seed if the Spartans can add a win over undefeated Iowa in their resume.

Alabama is the overall favorite at +120 to win the national championship and it’s tough to see them fall in the semifinal for the second-straight year, especially with how Derrick Henry and the defense have been playing.

Oklahoma has arguably been just as impressive, as it illustrated in its clinical blowout of Oklahoma State in Bedlam. The Sooners’ odds championship odds have dropped to +180, and might just have what it takes to bring down an undefeated Clemson.

Create a betting account now and cash in on all the best college football action with the College Football Playoff contenders.