After 19 gruelling weeks, the Super Bowl stage is finally set: no. 1 in the AFC vs. no. 1 in the NFC. All-conquering offense vs. impenetrable defense. The Denver Broncos vs. the Seattle Seahawks.

Peyton Manning will lead his Broncos into his younger brother’s home stadium in search of a legacy-securing second title, but standing in his way will be the Seahawks’ excellent Legion of Boom secondary, led by the infamous Richard Sherman.

This year’s Super Bowl promises to be one of the most evenly matched in some while. For only the second time in 20 seasons, the two no. 1 seeds from each conference will meet in the NFL’s grandest stage. This Super Bowl will also mark the first time since 2000 that the no. 1 ranked offense will face the no. 1 ranked defense. 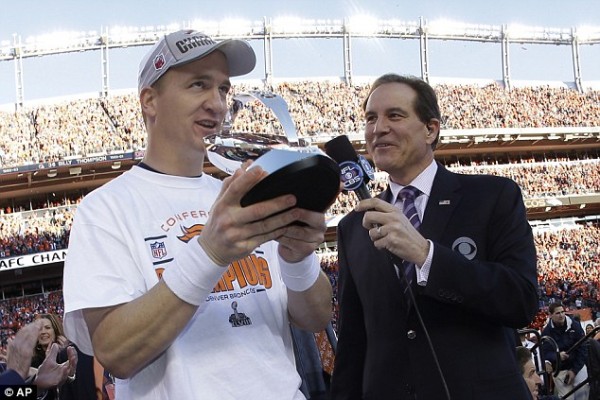 The 2013 Denver Broncos may very well be the greatest offense ever assembled. The numbers speak for themselves: new NFL records set in points (606, 37.9 points/game), total yards (7,317) and touchdowns (76). Of course, chiefly responsible for this record-breaking campaign has been the soon-to-be five-time NFL MVP Peyton Manning, who broke NFL records for passing TDs (55), passing yards (5,477) and single-game TDs (7).

That MVP-caliber Manning was in full display in the AFC Championship Game against the New England Patriots. Peyton thoroughly outplayed fellow legendary quarterback Tom Brady by completing 74% of his passes for 400 yards, 2 TDs and no INTs in the Broncos’ comfortable 26-16 victory.

The high-octane Broncos offense has slowed down some in the playoffs, averaging just 25 points in two games. Luckily, the defense has been spectacular during the postseason. Denver has held its past two opponents to a combined 3 points in the first three quarters (but a combined 30 points in two fourth quarters, albeit protecting a lead). The Broncos run defense in particular has shut down two previously prolific running attacks averaging well over 100 yards/game to just 65 yards.

With the elements potentially playing a factor in New York, the running game could be called upon, which should suit Denver just fine. The running back platoon of Knowshon Moreno and Montee Ball once again exceeded 100 yards against the Pats, a mark they’ve reached for eight of their last nine games.

Will Peyton Manning exorcise his postseason and cold weather demons in New York?
The total has gone UNDER in 5 of Denver’s last 5 games. Bet now on the Denver Broncos. 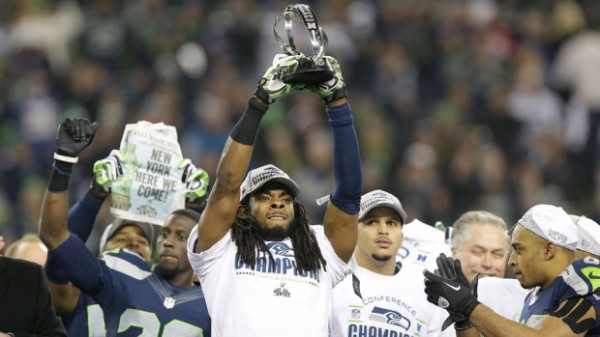 But if any team can go toe-to-toe with that historic Broncos offense, it would be the 2013 Seattle Seahawks and their shutdown pass defense, which could go down as one of the best defensive units in NFL history. The “Legion of Boom” was the foundation upon which the NFL’s top defense in terms of DVOA, points allowed (14.4) and yards allowed (273.6) was built.

The Legion laid the boom once again on Colin Kaepernick and the San Francisco 49ers in the NFC Championship game. Kaep threw for just 153 yards with 2 interceptions as the Seahawks secondary took away his two main weapons, Anquan Boldin and Michael Crabtree, who combined for only nine catches on 17 targets. And with the game on the line, star corner Richard Sherman made the crucial play to force the second, game-sealing interception.

Although the Seahawks run defense allowed 161 rushing yards, 130 of those yards came from Kaepernick’s scrambling, a threat they won’t face with Manning. The Niners running backs – including Frank Gore – were held to just 31 yards on 17 carries, a measly 1.8 yards/carry.

Russell Wilson bounced back from a subpar outing against the Saints with 215 yards on 64% completion and a key touchdown throw on 4th down in the fourth quarter to give Seattle the lead. But once again, the offense – especially in the cold weather – will likely be on the capable legs of Marshawn Lynch, who logged his fourth 100+ yard rushing game in six career playoff games.

Can Beast Mode carry the Seahawks to a first Super Bowl crown in franchise history? The total has gone UNDER in 5 of Seattle’s last 5 games. Bet now on the Seattle Seahawks.