The Florida Gators didn’t look like a team that has a solid chance of making the College Football Playoff after needing an overtime period to beat a 2-9 FAU team, 20-14. Nevertheless, they’ll try to move on from this and relocate their dominant form when they play host to the red-hot Florida State Seminoles in their final game of the regular season this weekend. Can the Gators succeed in doing so?

Read on further for everything you need to know about this crucial college football matchup. And while you’re at it, you can check out our preview of Ohio State vs. Michigan.

[sc:NCAA240banner ]For the third-consecutive year, the Florida State Seminoles are undefeated at home. They completed this feat by breezing through their matchup with the Chattanooga Mocs on Saturday night, 52-13, in their final game at Doak Campbell Stadium this season.

It was Dalvin Cook who led the way for them in this one. Cook carried the ball 15 times for 106 yards and added two touchdowns under his name. That game marked  the seventh time that he’s reached 100 or more rushing yards this year. The sophomore running back has now garnered a total of 1,682 yards (1, 475 rushing and 207 receiving), setting a new school record for the most all-purpose yards accumulated in a season.

Up next for Cook and the Seminoles is their annual rivalry showdown with the Florida Gators at Ben Hill Griffin Stadium this coming weekend. They are 4-1 SU and 3-2 ATS in their previous five meetings with the Gators.

In order for the Seminoles to come out on top, they ought to remain diligent in taking advantage of their well-balanced offense that averages 184.3 rushing yards and 251.6 passing yards per game across 11 games this season, which is among the best in the ACC.

Look to none other than Cook, who’s posting a conference-best 8.0 rushing yards per carry, to continue leading the charge on the ground and make life tough for the Gators.

However, the Noles need a stand-out performance from junior quarterback Sean Maguire. Maguire hasn’t impressed too much since taking over the stating job from Everett Golson. He went just 16-of-29 for 164 yards and one interception in FSU’s 23-13 road loss to Clemson.

The Seminoles will have to be more creative and persistent in breaking through a Gator’s defense that’s only allowing a SEC-low of 14.5 points per game. 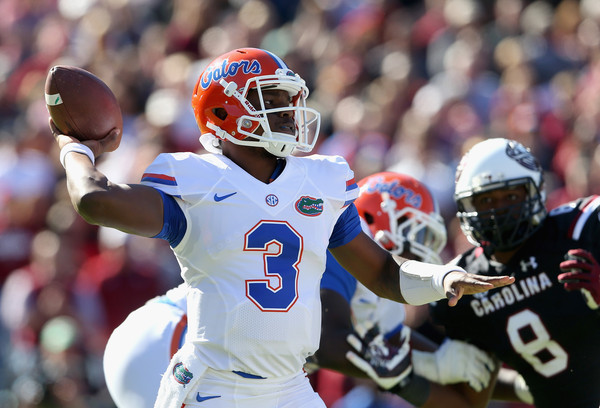 Many expected the Florida Gators to dominate Florida Atlantic on Saturday afternoon. But that wasn’t the case at all as the Gators were held scoreless in the first half and needed an extra period to notch their 10th triumph of the year.

The Gators, who are at the top of the SEC East division, struggled to find their offense especially on third-down, where they were just 2-for-13. Fortunately, they managed to save themselves from a gut-wrenching loss when QB Treon Harris found Jake McGee for a 13-yard score during the overtime session to give them the ugly 20-14 win.

Moving towards their Week 13 matchup, the Gators will have make sure that they’re in their best form from the get go when the Florida State Seminoles pay them a visit this weekend. Florida is 5-0 at home thus far this season and will be looking to stretch that unbeaten mark further. For the Gators to successfully do so, the onus is on their defense to hold off the Seminoles’ formidable offensive game (435.9 all-purpose yards per game and 32.8 points per game this season).

As for the offense, Harris, who converted just 8 of his 17 passes for just 122 yards against FAU, has got to make better decisions and ultimately capitalize on their passing game (222.9 yards per game).  That said, the duo of Demarcus Robinson and Antonio Calloway will be Harris’ main targets. The two are the team’s top two pass catchers and have tallied 1,046 receiving yards and six TDs combined this year.

Meanwhile, the Gators could also lean on their ground attack as another option. They have their junior running back in Kelvin Taylor to lead them as he currently boasts team-bests of 834 rushing yards and 13 touchdowns. Taylor was also one of the few bright spots in their contest with FAU, rumbling for a game-high of 98 yards on 25 carries with a score.

The Seminoles wins but fails to cover the spread.

Create a betting account now and cash in on all the NCAA college football action.