The champs’ reign could be coming to an end. After 23-straight games unbeaten, Ohio State was finally brought down at home by Michigan State, putting a serious dent in the Buckeyes’ chances of defending their national championship.

Ohio State still has a tiny sliver of hope to make the College Football Playoff, but it must first go to The Big House and beat the Michigan Wolverines, who would just love to end their fierce rivals’ dreams of a title repeat.

Read on below for our complete breakdown of The Game. Meanwhile, check out our previews of Rivalry Week’s other top attractions, Bedlam (Oklahoma vs. Oklahoma State) and the Egg Bowl (Ole Miss vs. Mississippi State).

Ohio State’s perfect season finally came to an end with a stunning 17-14 loss to a Michigan State team that was without starting quarterback Connor Cook. It was the offense that led Ohio State down. The Buckeyes could only muster 132 yards of total offense, the lowest total ever for any Urban Meyer-coached team.

[sc:NCAA240banner ]J.T. Barrett – 9-of-16 for 46 passing yards – was a complete non-factor through the air, and went 0-of-4 in passes of 10 yards or longer. Meanwhile, Ezekiel Elliott’s streak of 15 consecutive 100-plus yard rushing games was emphatically put to an end as he ran for just 33 yards.

Meyer took responsibility for the Buckeyes’ impotent offensive performance, citing his poor play-calling. Look for Meyer to atone for his mistakes against Michigan, but it remains to be seen whether Elliott will be part of that offense after his inflammatory post-game comments.

Prior to the Michigan State game, Elliott had been the Buckeyes’ most reliable offensive player all season. If he gets put in Meyer’s doghouse for his outburst, the Buckeyes will have a tough time replacing his production against a very formidable Michigan defense.

Ohio State has dominated The Game for the past decade-plus. The Buckeyes are 10-1 in their last 11 meetings with Michigan, and 8-3 ATS. 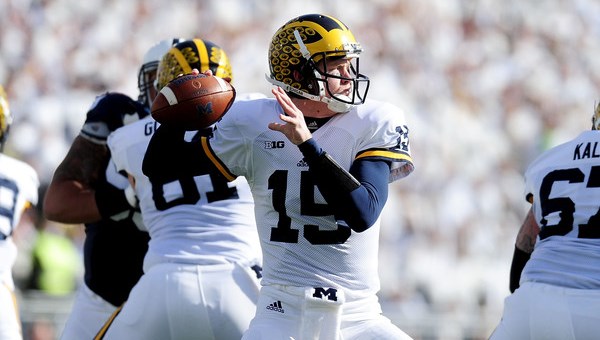 Michigan’s defense had a pretty significant hiccup against the Indiana Hoosiers, giving up a season-high 527 total yards in a very close 48-41 overtime win.  But that defense bounced back in a big way on Saturday to lead the team to a 28-16 win against Penn State. The Wolverines gave up just 207 yards of total offense and held the Nittany Lions to three field goals in three trips to the 10-yard line.

Michigan continues to boast a top-3 defense in the nation per the S&P+ rankings, and has all the tools to emulate what the Spartans did in terms of limiting the Buckeyes offense. The Wolverines have been especially stellar against the run, ranking inside the top-10 in the nation in yards per carry. Their job could be made easier with the possible absence of Ohio State’s top offensive weapon, Ezekiel Elliott.

Their secondary should also be able to slow down an Ohio State offense that has seemingly lost the ability to stretch the field this season. Michigan has held opposing quarterbacks to the second-lowest quarterback rating in the nation.

Meanwhile, the Michigan offense has a chance to move the ball pretty effectively against a potentially worn out Ohio State defense that spent 38 minutes on the field against Michigan State and faced 51 running plays.

Quarterback Jake Rudock has come on strong as a passer lately. He’s completing nearly 70 percent of his passes and averaging 344 yards with 10 touchdowns against two interceptions in his last three games.

Michigan’s defense puts the clamps on the Buckeyes offense – with or without Elliott. The Wolverines win, 24-17.