The annual Egg Bowl between the Ole Miss Rebels and the Mississippi State Bulldogs will be one of the many fascinating regular season finales next Saturday. And with these two interstate rivals still alive for a Bowl game berth, you can bet that this bout will bring all the attrition that we’ve come to expect from these formidable programs.

Let’s take a look below at how these two Mississippian schools size up as they’re about to re-write the next chapter of their long-running rivalry. Afterwards, check out our previews for Oklahoma vs. Oklahoma State and Florida State vs. Florida to be on top of the rest of the NCAA’s equally intriguing interstate clashes.

[sc:NCAA240banner ]The Ole Miss Rebels bounced back from their heartbreaking 53-52 loss to the Arkansas Razorbacks with Saturday’s impressive win over the LSU Tigers, 38-17.

It was senior quarterback Chad Kelly who delivered the goods for Ole Miss once again by going 19-of-34 for 280 passing yards, two touchdowns and no interceptions. And with 34 TDs for the year, Kelly has broken Eli Manning’s school record for total single-season passing touchdowns.

There seems to be no slowing down this Rebels offensive surge, which was tops in the SEC in points per game (40.7) and offensive yards per game (526.6) entering Saturday’s bout against LSU.

The team’s defense also stepped up by picking off the Tigers’ Brandon Harris twice in Saturday’s game. Creating such turnovers against Mississippi State’s gunslinger Dak Prescott next week will be crucial, and the Rebels are more than up to that task with their 15 INTs for the season (tied for most in the conference with Alabama). However, and oddly enough, Ole Miss’ D is still the second-worst team in the SEC in total passing yards allowed.

With that said, you can still expect another shootout in Starksville next Saturday. Yet it’s pretty strange and worth noting that the total has actually gone under in seven of the last nine meetings between these two teams.

Create a betting account now to start betting on all your favorite teams from the SEC and all the other top-heavy conferences in the NCAA. 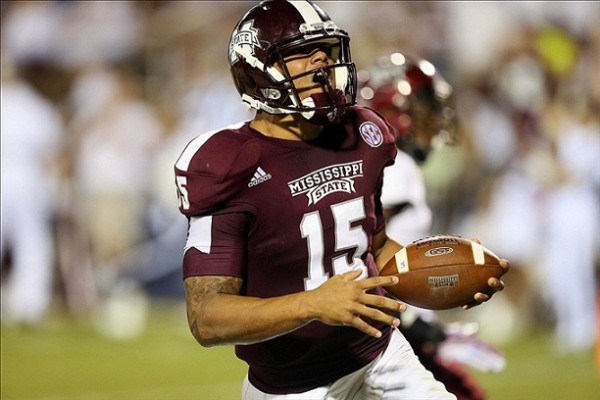 The Mississippi State Bulldogs somehow came out on the winning end of a thrilling 51-50 win over the Arkansas Razorbacks on Saturday night. Thanks to a blocked field goal that would’ve given Arkansas the victory, the Bulldogs are still well within striking distance of a big bowl game appearance, especially with a win over the Rebels next week.

If it wasn’t for the heroics of quarterback Dak Prescott, the Bulldogs would’ve become the next victim of the Razorbacks’ role as the SEC’s giant slayers. He threw for a career-high 508 yards to go with five TDs, and also ran the ball for 46 yards and two more scores. And no play was bigger than Prescott’s passing touchdown with about three minutes left in the game to put Mississippi State up by one.

The Bulldogs, though, coughed up three turnovers in that game – including a pick by Prescott (just his third INT for the season) – and had no takeaways themselves.

What’s also concerning for Mississippi State is that its defense surrendered a whopping seven passing touchdowns to Arkansas’ Brandon Allen. Entering Saturday’s contest, the team has only allowed an SEC-best six passing TDs to opposing quarterbacks. The Bulldogs’ secondary better shape up, because red-hot Chad Kelly of Ole Miss is up next for their regular season finale.

Still, recent history has been kinder to the Bulldogs than the Rebels in their on-going rivalry. They have won the last five games (4-1 ATS) in Starkville against their neighboring adversaries from the Magnolia State.