All eyes are on the Big 12 right now as we head towards the conclusion of the 2015-16 college football regular season. The Oklahoma Sooners and Oklahoma State Cowboys, who are both eyeing a playoff spot, will battle it out for arguably the biggest Bedlam match this coming Saturday at Boone Pickens Stadium. Who will reign supreme in this one and finish off the season on a strong note?

Read on further for an in-depth breakdown of this rivalry matchup. And while you’re at it, you can check out our preview of the Seminoles vs. Gators.

Just when you thought that the Oklahoma Sooners were well on their way to victory last Saturday night, the TCU Horned Frogs suddenly came alive and went on a furious rally in the final period. But fortunately, the Sooners were able to survive when they blocked TCU’s two-point conversion with less than a minute remaining in regulation.

[sc:NCAA240banner ]Now, the Sooners head to their season finale and in-state rivalry game next weekend opposite the Oklahoma State Cowboys, who will be fresh off their first loss of the year against Baylor. But they might not have the services of their starting quarterback, Baker Mayfield, whose status remains questionable after leaving the game versus TCU with a head injury.

If Mayfield is still out, the pressure is on Trevor Knight, who replaced Mayfield behind center and converted just five of his 16 passes for 76 yards on Saturday night, to fill in the void.

As backup QBs go, Knight is a pretty experienced one, especially in terms of taking over late in the season. The redshirt junior got a couple of starts over incumbent Blake Bell during the tail-end of the 2013 season, including that incredible MVP performance in the 2014 Sugar Bowl against Alabama.

Across six games played this season, Knight has thrown for 305 yards and two scores while completing 55 percent of his passes.

Meanwhile, key to Oklahoma’s success this season has been their ground game that’s averaging 225.1 rushing yards per contest, the fourth-most in the Big 12. A reason for this has been on second-year running back Samaje Perine. He has rumbled for a team-high of 1,160 yards with 13 touchdowns and is posting 6.0 yards per carry.

After seeing Baylor batter Oklahoma State for 304 rushing yards, look for the Sooners to do the same lean on the running game against the Cowboys, especially if Mayfield can’t play.

Oklahoma is 4-1 SU and ATS in its previous five road games. 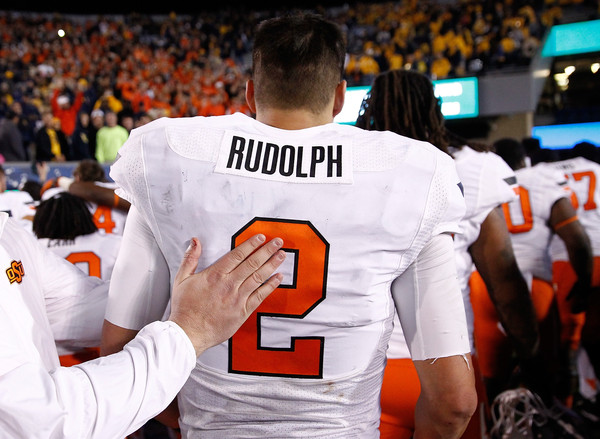 All good things must come to an end and that includes the Oklahoma State Cowboy’s perfect season. They suffered their first loss, 45-35, at the hands of the Baylor Bears, who were led by KD Cannon’s 210 yards on five catches and two scores.

The Cowboys, who are 5-1 at home this season, are likely out of contention for the College Football Playoff, but they still have a good shot on becoming the Big 12 champions. In order to do so, they’ll need to win their season-finale against the Oklahoma Sooners this weekend and hope that either TCU or Texas can find a way to knock off the Bears.

However, it’ll be easier said than done to beat the Sooners, who are arguably the best defensive team in the Big 12. They’re currently surrendering just 20.5 points per game this season, which is the fewest in their conference.

That being said, the Cowboys can’t afford to have another inconsistent night on offense if they wish to emerge with the win. QB Mason Rudolph, who threw for 430 yards with three touchdowns, needs to continue providing brilliant numbers. He’ll have reliable targets in James Washington and David Glidden to ignite their air game which is the third-highest in the Big 12 with 360.3 yards per game.

Washington leads the team with 908 yards receiving along with nine touchdowns to his name. Glidden, on other hand, isn’t lagging that far behind with 783 yards of his own and three scores. Both wide receivers may prove to be a bit of a handful for the Sooners’ secondary.

Oklahoma State is 2-3 SU and 3-2 ATS in its last five encounters with the Sooners.

Cowboys’ inconsistency on offense continues but they still  manage to save themselves through their defense to escape with a single-digit victory.

Create a betting account now and cash in on all the NCAA college football action.