[sc:NFL250 ]The Green Bay Packers may have been relegated as a Wild Card team entering the playoffs, but they made sure to make one explosive postseason opener by beating Washington, 32-18, on the road. The Packers now have a chance to make a return trip to the NFC Championship game, but they’ll need to get past the Arizona Cardinals first in the Divisional round.

Take note that the Cardinals’ 38-8 blowout of Green Bay in Week 16 of the regular season is still fresh on everyone’s minds. Now, can Arizona take advantage of its one-week bye to deal the Packers another big loss?

Get everything you need to know for the NFL Playoffs. Check out our complete predictions for the Divisional Round as well as our best sleeper picks.

Where: University of Arizona Stadium, Glendale

The Green Bay Packers go as far as Aaron Rodgers takes them. Rodgers is still the lifeblood of his team, as his play can force the team to either sink or swim in this big matchup against the Arizona Cardinals. The Green Bay quarterback may have shaken off his horrible 0-2 stretch to end the regular season already, as his performance against Washington in the Wild Card game should give him plenty of confidence moving forward.

[sc:NFL240banner ]Rodgers was exceptional, especially in the second quarter of the Packers’ Wild Card victory over the Redskins on Sunday. He completed 14 of 20 passes for 148 yards and two touchdowns to give the Packers the lead before halftime ad before the team’s backfield took over in the second half. Running backs Eddie Lacy and James Starks each scored a touchdown and combined for 116 rushing yards to ice the game.

Rodgers dealt most of the damage passing to James Jones, who led the team with seven catches and 81 yards, with Davante Adams and Randall Cobb hauling in both of Rodgers’ passing TDs. Adams, though, suffered a knee injury against the Redskins. It remains to be seen if he can take the field Saturday against the Cardinals.

If the Packers are to avenge their 38-8 destruction at the hands of Arizona in Week 16, then they’ll need the running game to draw pressure away from Rodgers. The Packers signal-caller was sacked a whopping eight times against Arizona, with two of them resulting into strip sacks that were returned for touchdowns. Also, Lacy and Starks combined for just 71 yards on 15 carries to go with a lost fumble against the Cards.

The Packers’ defense was also red-hot in the Wild Card game. They sacked Washington’s Kirk Cousins six times and held the Redskins to just 84 yards rushing. Expect the Packers to give everything they have to stop Arizona in the Divisional Round.

The Packers are 4-1 SU/ATS in their last five games on the road. 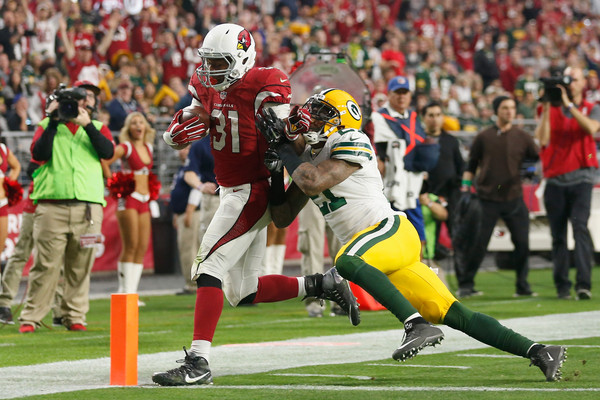 The Arizona Cardinals have all the reasons to be confident ahead of this matchup against Green Bay. They have home-field advantage, and have already beaten the Packers in blowout fashion in just Week 16 of the regular season.

The Cardinals also have had plenty of rest, which could mean that linebacker Markus Golden and defensive tackle Josh Mauro would be back for the Divisional round. The first-round bye would also likely have given defensive lineman Frostee Rucker, wide receiver Michael Floyd and running back Andre Ellington enough time to get healthy heading into Saturday’s game.

The return of Golden, Rucker and Mauro would be a big boost for the Cardinals’ pass rush. Arizona must’ve been extremely thankful for its front seven during the 38-8 victory at Green Bay in Week 16. The Cardinals had a whopping nine sacks on the Packers’ Aaron Rodgers, two of which were forced fumbles that were returned for touchdowns.

Having Ellington at full health would be a big boost to Arizona’s rushing offense. He had 40 yards on seven carries in Week 16 against the Packers. Rookie running back David Johnson should also have his moments after running for 442 yards and four touchdowns in the last five games since taking over the starting role of injured Chris Johnson.

Despite a solid performance in the regular season, quarterback Carson Palmer is still inexperienced when it comes to the playoffs. He owns an 0-2 record and hasn’t played in the postseason since 2009. Palmer will be hoping for another solid performance against the Packers; he threw for 265 yards with two touchdowns and a pick in his previous outing against Green Bay.

Palmer should continue to rely on his solid receivers Larry Fitzgerald and John Brown. Fitzgerald led the team with 109 catches, 1,215 yards and nine touchdowns in the regular season. Brown, on the other hand, was just a step behind with 1,003 yards and seven scores. This duo caught a touchdown apiece against the Packers in Week 16, but finished with just a combined 54 yards.

The Cardinals are 1-5 ATS in their last six games at home.

The Packers fight tooth and nail to cover +7.

Create a betting account now and catch all the betting action from the exciting NFL Playoff race.