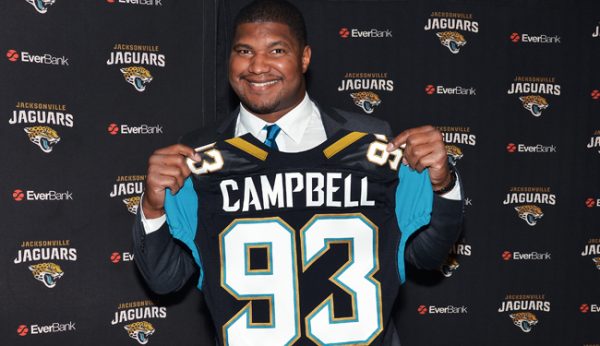 The real question should be: is there really any strength for this Jacksonville team?

On paper, the Jaguars have a wealth of talent on the defense. They signed one of the best defensive ends in the league in Calais Campbell, who’ll join an intimidating D-line comprised of Dante Fowler, Malik Jackson and Yannick Ngakoue, who has eight sacks in his rookie campaign. The secondary got a whole lot better too with the addition of breakout cornerback A.J. Bouye as a nice complementary piece to Jalen Ramsey.

The Jags also have streaky weapons in the passing game, with Allen Robinson looking to bounce back from a down season and Allen Hurns finally healthy in his return as the No. 2 wide receiver.

However, like in seasons past, all the promising talent on offense and defense will be for naught if the most crucial piece to the team doesn’t see a vast improvement to his game. Which leads us to…

It’s an age-old adage that quarterback is the most important position in football, and the Jaguars are still putting their faith in Bortles, who has thrown 51 interceptions in 46 career games.

The biggest news out of Jacksonville’s offseason was that Bortles threw five picks in a practice session. In mid-June, head coach Doug Marrone asked how many passing attempts per game he’d like to see the maligned QB throw this season, and his sincere reply was “zero“. After the five-pick incident, newly-signed tackle and two-time Pro Bowl selection Branden Albert didn’t even wait until the preseason to retire from football, which goes to show how little confidence Bortles’ teammates have in him right now.

While we’re on the topic of the offensive line, this unit has been a mess for the Jags as well. The O-line couldn’t protect the QB nor create lanes for the run game, which would explain why the team ranked in the bottom-third of the league in virtually all major offensive categories.

Bortles is pretty much a lost cause at this point, which means that Jacksonville’s best hope of being competent hinges on its first-round and fourth-overall draft pick, running back Leonard Fournette.

The LSU standout will be the Jaguars’ best rushing option since Maurice Jones-Drew, and Fournette has all the right tools to become the next big running back in the NFL. The 2015 consensus All-American averaged over six yards per carry and scored a total of 30 rushing TDs in his final two seasons in The Bayou, and he’ll be a nice security blanket for Bortles on check-down situations as well.

However, as we’ve mentioned earlier, the Jaguars O-line is not exactly dependable. But if Fournette can do much more with so less, the Jags may just have a shot at making the playoffs for the first time in a long time.

Through their first nine games of the season – they’re on bye on Week 8 – the Jaguars will face just three teams with winning records from 2016. Two of them are against division rivals Houston and Tennessee during the first two weeks of the season, and with Pittsburgh (week 5) as the only team with a double-digit win tally.

If the Jags can’t even get one over the bumbling Browns, they might as well forget about the playoffs. The schedule also gets much tougher after Week 10, with the Cardinals, Colts, Seahawks, Texans, 49ers and Titans coming in succession to close out their season.

The Jaguars, currently (and rather generously) priced at +475 to win the AFC South, finish at the bottom of the division for the second year in a row and miss out on the playoffs for the 10th-straight season.

Create a betting account now to win big from NFL futures before the much-anticipated regular season kicks off!