With the Denver Broncos’ shock loss to the St. Louis Rams on Sunday, the 7-3 Kansas City Chiefs now find themselves with a share of top spot in the suddenly wide-open AFC West. The Chiefs look to have a pretty easy assignment up next when they face the 0-10 Oakland Raiders.

But despite their atrocious record, the Raiders have not lain down against anyone, and will be desperate to avoid setting the wrong kind of history.

Sunday will also feature a top-vs.-bottom division clash, this time in the NFC East. Check out our preview of the Sunday Night Football game between the Dallas Cowboys and the New York Giants here, and read on to see if the Chiefs can keep their winning streak alive.

There’s no denying it any longer: the Kansas City Chiefs are for real. With an impressive 24-20 home win over the defending champion Seattle Seahawks, the Chiefs have extended their winning streak to five games, and have covered the spread in each and every one of them.

[sc:NFL240banner ]The Chiefs won despite playing a less than perfect game against Seattle. They turned the ball over twice with two fumbles and gave up 204 rushing yards to the Seahawks, which factored into them having nine less minutes of possession.  But the defense stepped up and shut out the Seahawks in the fourth quarter, while Jamaal Charles’ 159 rushing yards and two touchdowns more than made up for his one fumble.

At this point, it’s hard to see Kansas City changing anything from their highly successful game plan, which is to defend well – no one has topped 20 points against them during their five-game win streak – and run the ball well enough to get the points they need. The Chiefs’ 16 rushing touchdowns are the most in the league this season.

That has been the winning formula against everyone they’ve faced since their bye, and that should be the recipe for success against a Raiders team that has been unable to both score and stop the run this season. The Raiders are giving up close to 130 rushing yards per game, 27th in the NFL.

The Chiefs have covered both their games as seven-plus point favorites this season, but both have been at home. The last time the Chiefs were favored as much on the road was by six points last season at Oakland. Kansas City won that game, 56-31.

Create a betting account now and put your money on one of the hottest teams in the NFL. 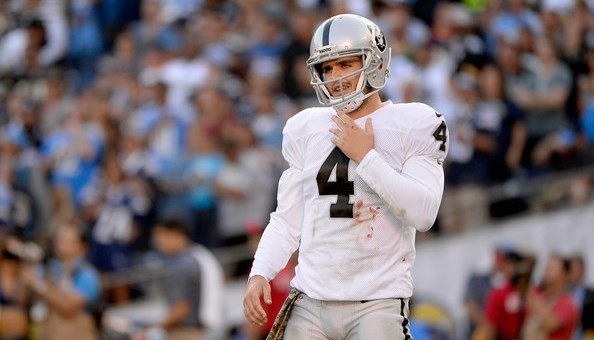 Oakland’s streak of futility is up to double-digits as the Raiders dropped their 10th-straight game of the season with their 13-6 loss to the San Diego Chargers on Sunday. Counting the end of last season, the Raiders have actually gone a full season – that’s 16 games – since their last win.

The Oakland offense was dreadful as it produced new season lows in points (six) and total yards (233). Derek Carr completed less than 50 percent of his passes for the first time this season and threw for just 172 yards and no touchdown. Second-year back Latavius Murray was a bright spot with four carries for 43 yards, but take those away and the rest of the team rushed for just 28 yards on 15 carries.

But as bad as Oakland has been – and really, it doesn’t get any worse than 0-10 – it hasn’t suffered too many humiliating blowouts. In fact, the Raiders have been relatively competitive in most games, especially against the big teams.

They easily covered double-digit spreads against the Patriots, Seahawks and Chargers (on the road), losing by just a touchdown or less. The Raiders are 5-5 against the spread this year.

Carr and the Oakland offense bounce back and cover at home, but the Chiefs extend their winning streak to six games.