The No. 11 Florida State Seminoles preserved their unbeaten record this season with a gutsy five-point victory over Miami on Saturday. They will look to keep the momentum going this coming Saturday when they take on the Louisville Cardinals in a blockbuster matchup at Doak Campbell Stadium.

Who will emerge victorious in this ACC clash? Read on below for a preview of this college football showdown and while you’re at it, you can check out our previews of No. 7 Michigan State vs. No. 12 Michigan and No. 18 UCLA vs. No. 15 Stanford.

Betting on the Louisville Cardinals (2-3)

Louisville will head to its ACC showdown with Florida State with momentum on its side after beating the NC State Wolfpack, 20-13, on October 4. It was another impressive victory for the Cardinals who recorded back-to-back wins for the first time this season. The Cards have won their last two games by an average of 24.5 points.

[sc:NCAA240banner ]Starring for the Cardinals in their latest triumph was freshman quarterback Lamar Jackson. He ran for 121 yards, including a 68-yard scoring sprint in the opening quarter that set the tone for Louisville’s victory. Jackson has already set a single-season school record by a quarterback with 435 rushing yards, including 313 in their last two wins over Samford and North Carolina State.

Louisville wreaked havoc against NC State’s defensive line, recording a total of 203 rushing yards. They will look to create the same amount of damage against a Florida State side that has surrendered 783 yards and 46 first downs in wins over Miami and Wake Forest the last two weeks.

For the Cardinals to snap the Seminoles’ 27-game winning streak in the ACC, they will need to continue their excellent play on the defensive end. They have allowed a total of 16 points in their last two games. This season, they have allowed an average of 20.2 points and 323.8 yards overall. They will need to put the clamps on Florida State quarterback Everett Golson who has yet to throw an interception this season. That may soon change, though, with the Cardinals defense already intercepting nine passes this campaign.

Betting on the Florida State Seminoles (5-0) 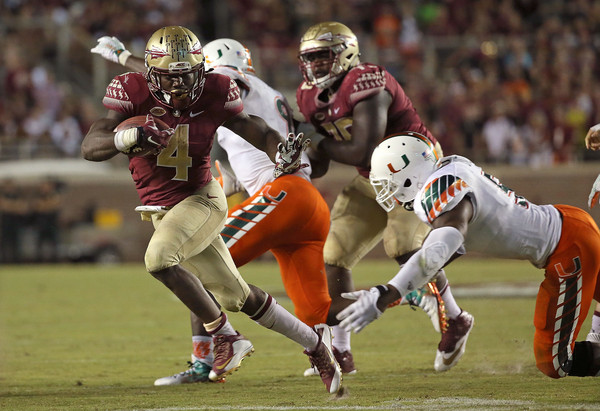 The Florida State Seminoles stretched their unbeaten run to five games with a 29-24 victory over the Miami (FL) Hurricanes on Saturday night. Running back Dalvin Cook was the star of the show for the Seminoles, rushing for 222 yards on 22 carries with three touchdowns. With the victory, the Seminoles extended their winning streak against the Hurricanes to six games, their longest in the series since 1963-72.

Cook has been lights out for the Seminoles early on this season, rushing for 792 yards and scoring eight touchdowns in his opening five games. He’s second in the nation in rushing offense with a whopping 158 yard per game average. He’s also second among Power 5 running backs with at least 50 carries in yards per carry (9.0). Cook will have his work cut out for him, however, against a Louisville defense that has conceded just three rushing touchdowns this season.

That being said, the Seminoles will fancy their chances against the Eagles as they have fared extremely well against them of late. They are 2-1 against Louisville in their last three games. The Seminoles eased past the Cardinals, 42-31, in their only meeting last year.