Who could have imagined before the start of the season that the Buffalo Bills, Miami Dolphins and the New York Jets will enter Week 2 as the joint leaders while the favorites New England Patriots will be the ones languishing at the bottom?

That’s exactly what transpired in an upset-filled opening week and for both the Miami Dolphins and the Buffalo Bills, they can make it an even greater start when they square off this coming Sunday at Sun Life Stadium.

Read on for a preview of this AFC East matchup and while you’re at it you can check out our preview of the Baltimore vs. Pittsburgh game this coming Thursday.

The Miami Dolphins made a major statement on Sunday when they stunned the five-time defending AFC East champions New England Patriots 33-20 to throw a seemingly one-sided division race wide open.

[sc:NFL240banner ]Trailing 10 points at the halftime break, the Dolphins buckled down and outscored the Patriots 23-0 in the second half. Miami’s running game came to life in the final half, outgaining the Patriots 222-67 with running back Knowshon Moreno the star of the show rushing for 134 yards and a big fourth-quarter touchdown.

Quarterback Ryan Tannehill had a so-so game completing just 18-of-32 passes for 178 yards with two touchdowns and one interception. Luckily for him, the Dolphins defense stepped up as they recorded their second-consecutive victory over their AFC East rivals, the first time they have done so since 2000-2001.

The Dolphins did it by limiting Pats QB Tom Brady to 29-of-56 passing for 249 yards and only one touchdown, and sacked the two-time Super Bowl MVP four times in the Pats’ first four possessions in the second half. After allowing 20 points in the first half, the Dolphins made the necessary adjustments as they shut out the Patriots entirely in the second half and dealt them their first opening day loss since 2003.

What made the performance of the Miami defense more impressive was that they pulled it off without their three starting linebackers – Philip Wheeler, who was inactive, and Dannell Ellerbe and Koa Misi, who both left the game with injuries in the first quarter.

With that being said, the Dolphins have a fantastic opportunity to go 2-0 for the second-straight year when they visit the Buffalo Bills this coming Sunday. The Dolphins went 4-4 on the road last season and a better record this year would be enough to push them into the playoffs. 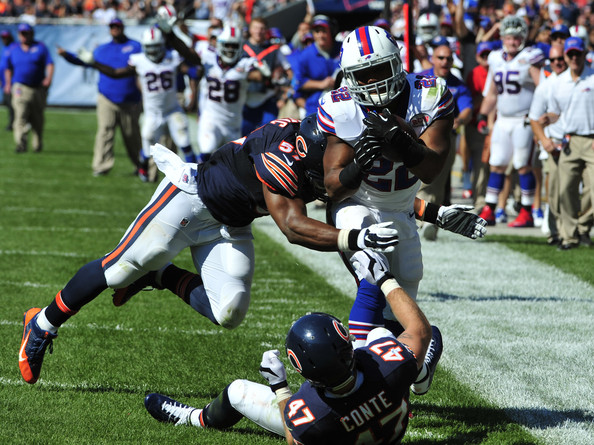 The Buffalo Bills provided one of the shock results in Week 1 when they upset the favored Chicago Bears 23-20 in overtime on Sunday to boost their hopes of finally ending their 14-year playoff drought this year.

It was the veterans that stepped up for the Bills as the two most-tenured players on the roster in Fred Jackson and Kyle Williams made the biggest plays to give Buffalo their first opening day win since routing Kansas City back in 2011.

The 33-year-old Jackson showed that he can still hang with the big boys as his 38-yard run to the Chicago 1-yard line in overtime set up Dan Carpenter’s field goal that gave the Bills the morale-boosting victory.

Quarterback EJ Manuel who had a disappointing preseason, completed 16-of-22 passes for 173 yards with a TD and an interception. More importantly, he took advantage of two Chicago turnovers that proved to be the deciding factor in the game. He produced scores off a Preston Brown fumble recovery and a Corey Graham interception as he looks to solidify his spot in the starting lineup.

The Bills showed patience last Sunday, even when calls were not going their way near the end of the game. That is very good news for a team who has developed a serious habit of losing it the past number of seasons.

The 35-year-old Kyle Williams, who made a vital interception in the fourth quarter, said “I told the guys after the game, teams I’ve been on in the past would have used that as a crutch or an excuse at the end of the game if we had gotten beat. It kind of fueled a little fire for everybody and they used that to go out and make plays and win the game. That’s the kind of team I want to be on.”

That team has a grand opportunity to go to the top of the AFC East this Sunday and start the season 2-0 when they host fellow leaders Miami Dolphins. The last time the Bills faced the Dolphins in Buffalo last December, they shut out Miami 19-0 to effectively oust the Dolphins from the playoff picture.

The Bills will have to rely on their running attack which was spot on in the game against the Bears. The Bills had a 193-86 advantage in the rushing yards department in the game against Chicago with Fred Jackson leading the way with 61 yards on seven carries. He is expected to carry the cudgels for the Bills once again against a Dolphins side whose defense is on a high after blanking the Patriots in the second half of their opening day encounter.

The Bills have won three of their last four meetings with the Dolphins. Buffalo was 6-2 ATS in their eight games at home last season.

The Bills pull off a tight win to go 2-0. Take them on a rare pick em line and enjoy what should be a very intriguing game.