Two struggling teams will look to find the winning formula across the Atlantic as the Miami Dolphins and the Oakland Raiders collide in the NFL’s annual showcase at Wembley Stadium this coming Sunday. Both teams will be desperate to arrest their respective losing skids and put their NFL campaigns back on track.

Read on for a complete preview of this matchup and while you’re at it, you can check out our complete NFL Week 4 preview and predictions.

After opening the season with a victory over the defending AFC East champions New England Patriots, it looked like things were finally on the upswing for the Miami Dolphins. Two games later, however, and they find themselves in yet another familiar situation, at the bottom of the division standings.

[sc:NFL240banner ]For the second-consecutive game, the Dolphins were unable recover from a sputtering start as they were thrashed by the Kansas City Chiefs 34-15. Their offense was once again the main culprit as head coach Joe Philbin’s men found it difficult to break through the Kansas City defense.

It is a worrying sign for new offensive coordinator Bill Lazor who was expected to bring a new up-tempo style to the Miami offense and generate points quickly. So far, that hasn’t been the case.

In their last two games, the Dolphins have averaged just 12.5 points per game. One of the main reasons behind their offensive malaise is the poor form of their quarterback Ryan Tannehill. Through three games, he has posted career-low numbers in completion percentage (56.5 percent) and passer rating (74.1).

In the game against the Chiefs, Tannehill completed just 21-of-43 passes for 205 yards against a pass defense ranked as the worst in the entire league.

It won’t get any easier for him this coming Sunday as he squares off with the Raiders at Wembley Stadium. The Raiders are the second-best team in the NFL this season in terms of opposing passing yards allowed, averaging just 164.5 a game.

Luckily for Tannehill, there’s still a bright spot in the Miami offense. Running back Lamar Miller gained 108 rushing yards on 15 carries as he single-handedly carried the Dolphins’ offense at times against the Chiefs.

Miller will be one of the main weapons of Miami this coming weekend, especially with the Raiders having problems with their defensive line. Oakland is fourth-worst in the NFL this season in opposing rushing yards with opponents averaging 158.7 yards against them.

The Dolphins are 6-4 in their last ten away games against the Raiders. 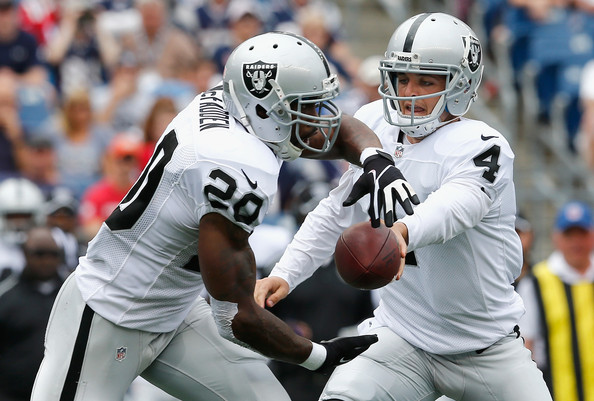 There’s plenty of gloom in the Oakland camp right now after the Raiders suffered a heart-breaking 16-9 defeat to the New England Patriots on Saturday.

A questionable holding call prevented the Raiders from tying the game late in the fourth quarter as the Patriots held firm to send Oakland to 0-3.

Just like the Dolphins, offense has been the main problem for Oakland this season. Through three games, the Raiders are averaging just 12.3 points per game, the worst in the NFL this year. In the game against New England, Oakland managed to score only three field goals courtesy of kicker Sebastian Janikowski. They have scored only one touchdown this season that has not come in garbage time.

Their inefficient running game surely hasn’t helped their cause. They are the worst running team in the NFL right now with a paltry 64.3 rushing yard average. Not helping things is the absence of RB Maurice Jones-Drew who missed his second consecutive game because of a hand injury.

With MJD returning to practice this week, however, he is expected to be available for the game against the Dolphins this coming Sunday. That is certainly good news considering Miami has the 13th-best opposing rushing yard average in the league with a 101.0 clip. His return will also help free things up for rookie quarterback Derek Carr who is still adjusting to life in the professional ranks.

Through three games, Carr has completed just 68 of 108 passes for a 63 percent completion rate. He is also a lowly 32nd among quarterbacks in the passing yards department averaging just 196.0 a game.

It won’t get any easier for Carr this coming weekend as he faces a Miami defense that is third-best in the league in sacks made with the Dolphins already generating nine this season. That is bad news for Carr who has been susceptible to errors this season. He has already thrown three interceptions this year.

The Raiders have successfully covered the spread in two of their last three games.