How Does the 2015-16 NCAA College Football Bowl System Work?

At long last, the 2016 College Football Playoff is set. Clemson, Alabama, Michigan State and Oklahoma have been deemed the four best teams in the nation this season, and are now preparing to battle it out in their respective bowl games on New Year’s Eve for a spot in the title game.

It looks as though the four most deserving teams got in, and should provide the second-ever playoff with great matchups that die-hard college football fans will be very happy with.

But for the sake of the more casual fan that’s only just getting into the action, here’s a fairly quick and simple explainer of how the fairly new playoff system works and what could be expected with the upcoming matchups. Meanwhile, click here for our predictions on the upcoming playoff.

How Does the College Football Playoff Format Work?

What is the College Football Playoff?

[sc:NCAA240banner ]In case you’ve been living under a rock since last year, the College Football Playoff is now the system used to determine the college football national champion. It was installed last year to take the place of the much-maligned Bowl Championship System or BCS, which used complex computer-generated algorithms in order to select the two teams who will play in the national championship game.

The new CFP system has two drastic changes to the old BCS system:

First, instead of just two teams playing a single game for the national title, the top four teams in the country are now still in play. Those teams will get paired up and play a mini four-team single elimination tournament, much like the Final Four during March Madness in college basketball. The No. 1 seed will play the No. 4 seed, while No. 2 will play No. 3.

The winners of the two semifinal games, which will be hosted by two of the six traditional big bowl games (the Rose Bowl, Sugar Bowl, Orange Bowl, Cotton Bowl, Fiesta Bowl and Peach Bowl), will go on to the national championship game.

The second big change in the system was the CFP selection committee, which is formed by a panel of 13 highly-experienced individuals from differing fields in college football. The committee has taken the place of the aforementioned computer formula in picking the four playoff teams and their ranking based on its criteria of strength of schedule, head-head results, comparison of results against common opponents, championships won and other factors. 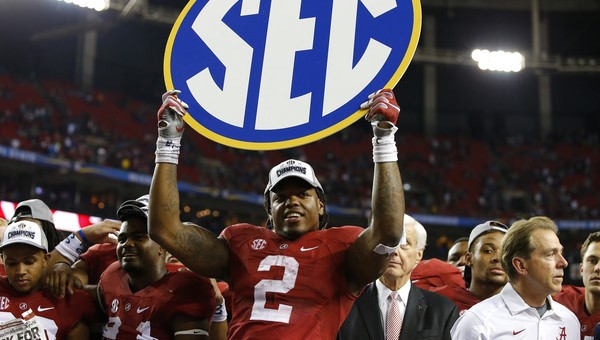 ESPN, the official broadcaster of the CFP, has been asking “Who’s In?” for about four months now and the committee has finally answered. It has picked Clemson, Alabama, Michigan State and Oklahoma. By and large, there have been no complaints as to the last four teams. All four teams won their respective conferences and have the best resumes to be in the playoff.

The bowl games, which are the best part!

Clemson went undefeated en route to claiming the ACC championship as well as the No. 1 seed in the playoff and has been paired up with the one true Big 12 champion and No. 4 seed Oklahoma in the Orange Bowl. Meanwhile, one-loss SEC champion and No. 2 seed Alabama takes on one-loss Big Ten champion and No. 3 Michigan State in the Cotton Bowl. Both matchups will be held on New Year’s Eve, and figure to produce some fireworks.

Despite the No. 1 Tigers going undefeated in the regular season, they are surprisingly 3.5-point underdogs to the Sooners, who have looked very impressive since losing their only game of the season to Texas. But both teams have very well-rounded teams, and are led by two excellent dual-threat quarterbacks in Deshaun Watson and Baker Mayfield, so this one could be a very close game.

Alabama is a much more pronounced 9.5-point favorite over Michigan State, who needed an epic final drive to defeat Iowa in the Big Ten title game. The Tide are led by Heisman Trophy winner Derrick Henry and an elite defense. However, the Spartans have one of the few defenses in the nation that stand a reasonable shot at slowing Henry down, and have the decided edge at quarterback with senior Connor Cook.

The winners of the Orange Bowl and Cotton Bowl will go on to the CFP national championship game to be held in the University of Phoenix Stadium in Glendale, Arizona, while the losers go home. The winner of that game will then be proclaimed the national champion. It’s as simple as that, and it’s what makes the College Football Playoff so captivating.

Create a betting account now and cash in on all the best college football action with the College Football Playoff.